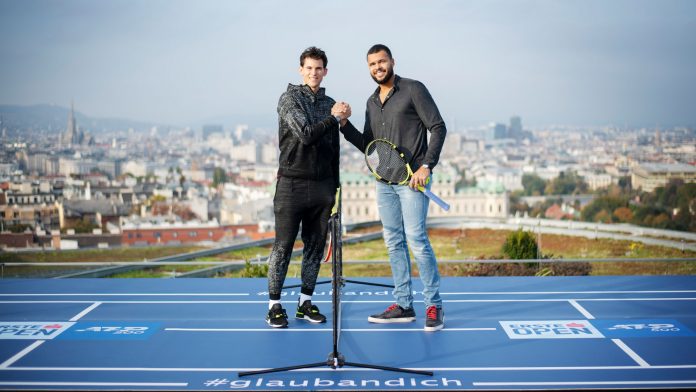 On Friday, Dominic Thiem and Jo-Wilfried Tsonga had a great time on the Erste Campus roof overlooking the Vienna skyline, enjoying plenty of laughs as they played some mini tennis. Little did they know that on Saturday, they would be drawn against one another in the first round of the Erste Bank Open.

World No. 5 Thiem has never advanced past the quarter-finals at his home ATP 500 event held in Austria. And if the 26-year-old hopes to make an even deeper run in Vienna, he’ll have to get past the 2011 champion in Tsonga, who also made the championship match in 2016-17.

Tsonga leads their FedEx ATP Head2Head series 2-0, with their most recent meeting coming at the 2016 BNP Paribas Open in Indian Wells. At the 2013 Erste Bank Open, Tsonga needed a third-set tie-break to defeat Thiem, who was then only 20.

Go Behind The Scenes In Vienna

For whomever emerges victorious, a difficult path lays ahead. The winner will play three-time ATP 500 winner Nikoloz Basilashvili or former World No. 7 Fernando Verdasco in the second round. Also in that loaded section is eighth seed Borna Coric — who was at his career-high ATP Ranking of No. 12 less than two months ago — and in-form #NextGenATP Canadian Denis Shapovalov.

Big-hitting Karen Khachanov is the second seed, and he will face a tricky test in his opener against Poland’s Hubert Hurkacz. Hurkacz defeated Gael Monfils — the fourth seed in Vienna — in Shanghai and then pushed Stefanos Tsitsipas to a final-set tie-break.

Monfils, who is in their half of the draw, will play wild card Dennis Novak in the first round before potentially facing #NextGenATP Italian Jannik Sinner, who opens against a qualifier. The 18-year-old enjoyed the best week of his young career in Antwerp, where he reached his first ATP Tour semi-final. And now he will try to make another run, but this time at an ATP 500 event, where he received a wild card.

Matteo Berrettini, the US Open semi-finalist and Shanghai finalist, leads the second quarter as the third seed. But the blockbuster of his quarter comes with a first-round matchup between sixth seed Felix Auger-Aliassime and two-time Next Gen ATP Finals competitor Andrey Rublev. Rublev won the pair’s only previous FedEx ATP Head2Head clash last year in Umag, triumphing in a three-set battle.

Former World No. 3 Milos Raonic and 2017 Next Gen ATP Finals champion Hyeon Chung will also meet in the first round in what will be the first clash between them. Raonic has not competed since the Laver Cup, and this will be his second event since the Coupe Rogers in August.

Djokovic 'Excited' To Suit Up For W&S Open, US Open