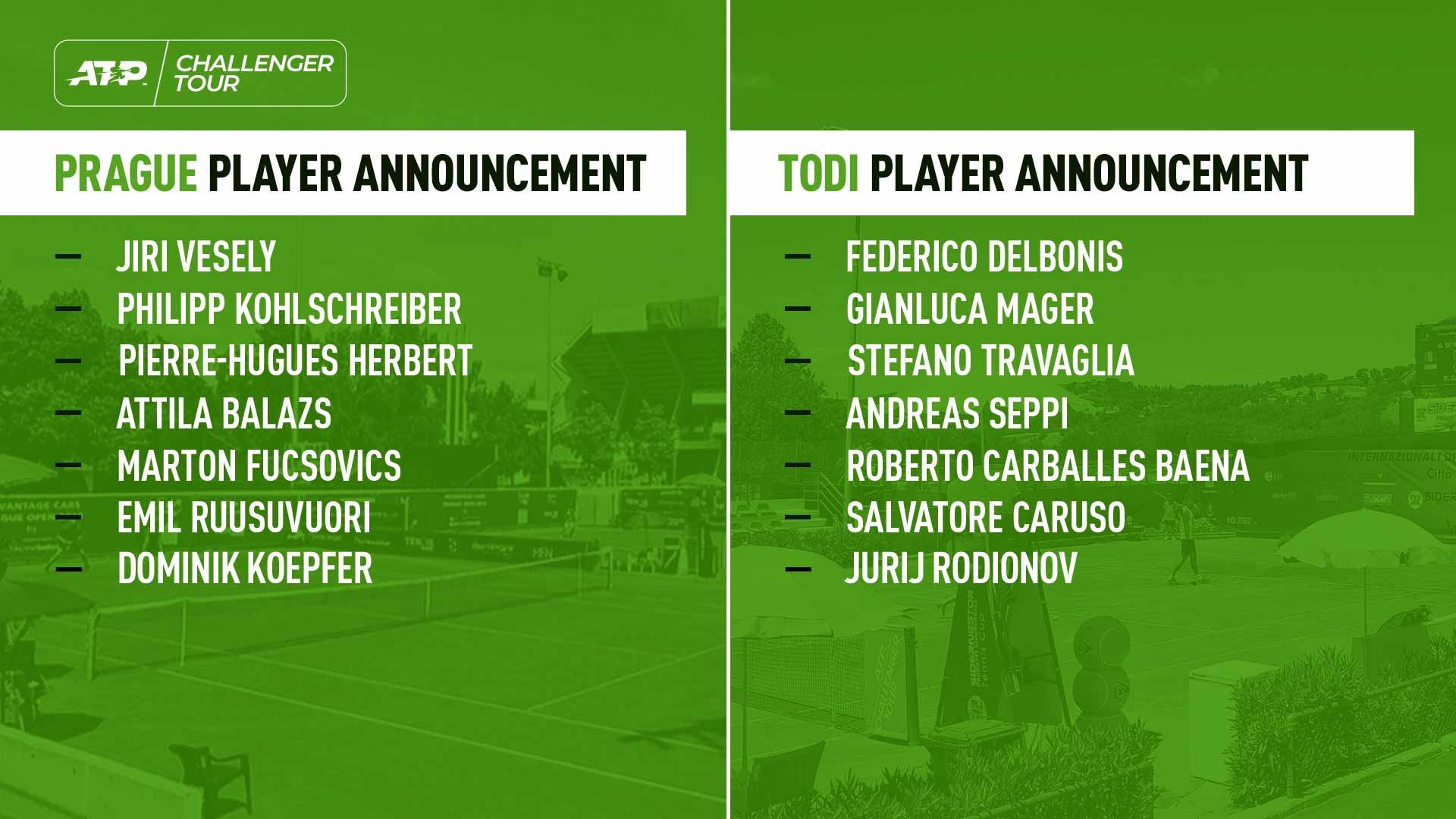 There will be no shortage of star power when the ATP Challenger Tour resumes play in two weeks. After being sidelined since March due to the COVID-19 pandemic, players competing on the Challenger circuit will return to action at clay-court events in Prague, Czech Republic and Todi, Italy.

Scheduled to commence on 17 August, the I.CLTK Prague Open 2020 by Moneta features six players inside the Top 100 of the FedEx ATP Rankings. Top Czech and World No. 65 Jiri Vesely is the highest-ranked player on the entry list and will be joined by Germany’s Philipp Kohlschreiber and Dominik Koepfer, as well as Hungary’s Attila Balazs and Marton Fucsovics.

World No. 71 Pierre-Hugues Herbert is also on the Prague entry list, as well as Finnish No. 1 Emil Ruusuvuori. Sitting one spot off a Top 100 breakthrough, the #NextGenATP star is hoping to join the club immediately. Arthur Rinderknech, the 2020 wins leader on the ATP Challenger Tour, will be in Prague as well. The former Texas A&M University standout won 16 of 20 matches in January and February, before the tour was suspended.

India’s top-ranked player and World No. 127 Sumit Nagal knows it won’t be easy, with such a strong field right out of the gates at the Challenger 125 stop.

“I’m really excited to play matches again and get in that competitive mode,” Nagal told ATPTour.com. “It’s what we train for. Everyone is feeling the same way. No one wants to be home anymore after all these months. All the players are going to try to play as much as they can. I cannot wait to get on the court and hit the ball again. I’m just really excited.”

Prague kicks off a four-week swing in the Czech Republic, which opens with a two-week stop in the capital city and weaves to historic events in Ostrava and Prostejov. With the goal of minimizing travel amid the pandemic, it is an important cluster of events planned for the ATP Challenger Tour restart in August.

Another four-week swing will be simultaneously held in Italy, which opens with a Challenger 100 event in Todi. The tournament also features six players inside the Top 100 of the FedEx ATP Rankings. Federico Delbonis (2017 champion), Roberto Carballes Baena and home hopes Gianluca Mager, Andreas Seppi, Stefano Travaglia and Salvatore Caruso are the Top 100 stars on the entry list.

Mager was on a tear prior to the tour’s suspension, reaching his first ATP Tour final in Rio de Janeiro. Seppi also appeared in a Tour-level championship in February, finishing runner-up to Kyle Edmund at the New York Open.

The 2020 edition of the Internazionali di Tennis Citta di Todi is the first in three years, returning after the tournament’s decade-long run came to an end in 2017. Former finalist and World No. 16 Marco Cecchinato is also in the field, as well as #NextGenATP stars Jurij Rodionov and Alexei Popyrin. Rodionov was one of the hottest players on the Challenger circuit in February, winning titles in Dallas and Morelos and posting a 15-2 record.

Following Todi, the tour of Italy swings to Trieste, Cordenons and Parma. Many players competing in Todi are also on the Trieste entry list, including Cecchinato, Popyrin and Rodionov.