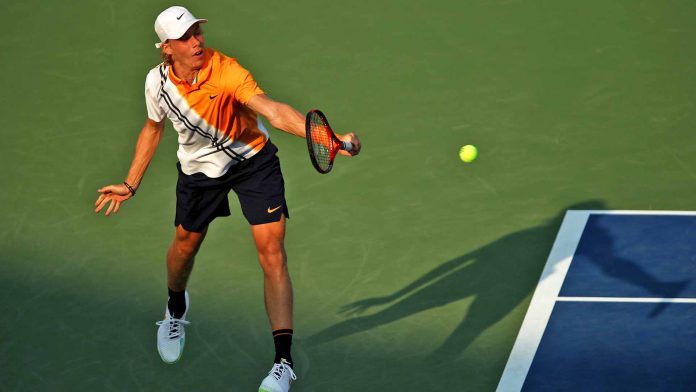 The highly-anticipated all-Canadian #NextGenATP clash between Denis Shapovalov and Felix Auger-Aliassime on Monday at the US Open ended in unfortunate circumstances. After exchanging 7-5 sets, the 18-year-old Auger-Aliassime was forced to retire midway through the third due to an irregular heartbeat. The No. 28 seed Shapovalov advanced while holding a 7-5, 5-7, 4-1 lead.

Drama was high as Shapovalov stormed back from 2-5 down in the first set and his countryman replicated the feat in the second, rallying to draw level. But after falling behind 4-1 in the third, an emotional Auger-Aliassime stopped play as he embraced his close friend at the net. Shapovalov continued to console a visibly shaken Auger-Aliassime following the match.

“It was definitely a tough way to win,” Shapovalov admitted. “First of all, it was a great match playing against Felix. The level was high at times. At first, I honestly think we were both very tight, and I don’t think the level was great. Then in the second set, I think it was a lot better from both of us. At the beginning, I was playing really good, then towards the end he picked it up. What happened in the third set, it’s tough to see a friend go down like that. It was tough. When I saw that he was struggling, I still had to keep trying to win, keep kind of pounding it on him. It wasn’t easy for me.

“Obviously it’s tough how it ended. But I think this match, it’s great for Canadian tennis, two young guys that are coming up that have grown up together playing against each other. It’s really good. I feel that’s the reason why so many Canadians are picking up tennis racquets.”

Shapovalov is trying to repeat the impressive run he went on at Flushing Meadows a year ago, when he beat Jo-Wilfried Tsonga en route to the fourth round. The left-hander, who is third in the ATP Race To Milan, is fresh off Round of 16 showings at North American hard-court ATP World Tour Masters 1000 events in Toronto and Cincinnati. He will next face veteran Italian Andreas Seppi.

“He’s definitely a super steady guy. I wouldn’t say he’s got crazy power, so he’s not going to blow me off the court. He’s really crafty, a really smart player,” Shapovalov said of his next opponent. “He’s another guy that’s got so much experience under his belt. He’s definitely going to be a lot more experienced on the court out there.
It’s going to be a tough match for me.”

But for now, fans will take joy in the play they saw between Canada’s two brightest young talents. It might not have ended the way either player wanted it to, but it certainly won’t be their last FedEx ATP Head2Head meeting.

“I told him at the net hopefully one day we’ll be playing in the finals of this tournament. I told him to keep his head up. We’re going to have so many matches together,” Shapovalov said. “Obviously it’s never easy playing against him because he’s such a close friend of mine. There’s a lot of noise going on, a lot of hype whenever these matches come around… It’s not easy when you know the person. It’s actually a pretty tough match for both of us. Yeah, it’s been a crazy ride with him. Hopefully it continues.”