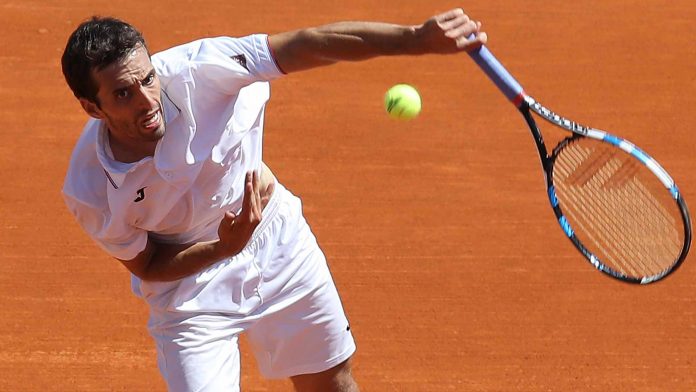 Spaniard Albert Ramos-Vinolas continued his remarkable run of form on Saturday when he booked a place in his first ATP World Tour Masters 1000 final at the 117th edition of the Monte-Carlo Rolex Masters.

Ramos-Vinolas, the No. 15 seed, kept his nerve to overcome French hope and No. 11 seed Lucas Pouille 6-3, 5-7, 6-1 in two hours and 16 minutes on another sun-kissed day at the Monte-Carlo Country Club.

Ramos-Vinolas, who is set to improve on his career-high of No. 24 in the Emirates ATP Rankings, will next challenge either fourth-seeded compatriot and nine-time champion Rafael Nadal or 10th seed David Goffin of Belgium in Sunday’s final. Should he face Nadal, it would mark only the fourth time in the tournament’s history that there has been an all-Spanish title match (2002 Ferrero d. Moya, 2010 Nadal d. Verdasco and 2011 Nadal d. Ferrer).

Both players naturally experienced early nerves in their first ATP World Tour Masters 1000 semi-final, with Ramos-Vinolas breaking Pouille to 15 in the first game. But Ramos-Vinolas was unable to consolidate the break, despite two game points in the next game. At 3-3, 15/40, Pouille struck a backhand long and two games later Ramos-Vinolas clinched the 40-minute set with Pouille attempting a ‘tweener off a lob, only to see his opponent hit a smash winner in response.

Just as he did in wins over World No. 1 Andy Murray and Marin Cilic earlier in the week, Ramos-Vinolas played a patient game, moving up the court or striking winners only when an opportunity arose. Pouille continued to press, but Ramos-Vinolas was wise to the Frenchman’s tactics and relentlessly targeted his weaker, though consistent groundstroke, the backhand.

Ramos-Vinolas came through his first pressure moment in the third game of the second set, a dramatic 14-point game that included two break points. At 5-5, the Spaniard struck two straight forehands long to enable Pouille to clinch his third break point opportunity. Buoyed by the predominantly French crowd, Pouille went on to level the scoreline at one-set all, when Ramos-Vinolas struck a forehand return long on Pouille’s second set point chance.

Ramos-Vinolas regrouped and surged to a 3-0 lead in the third set, helped by Pouille striking his fourth double fault at 30/40 in the second game. At 0-3, an ATP World Tour trainer came on court to treat Pouille for a lower back complaint that required a three-minute injury time-out, and while he returned to perform strongly, time was running out for a fight back. Two stray forehands gave Ramos-Vinolas a 5-1 advantage and minutes later the 29-year-old Spaniard reached the biggest final of his career after a hold to 15.

Competing in his fifth clay-court tournament of the year, Ramos-Vinolas is now 19-11 on the season – the fourth-best match wins tally on the ATP World Tour.

Pouille had been hoping to become the second French Monte-Carlo finalist in as many years, following in the footsteps of Gael Monfils, who lost to Nadal in last year’s final. Cedric Pioline was 30 when he became France’s last Monte-Carlo champion over Slovak Dominic Hrbaty in the 2000 final.