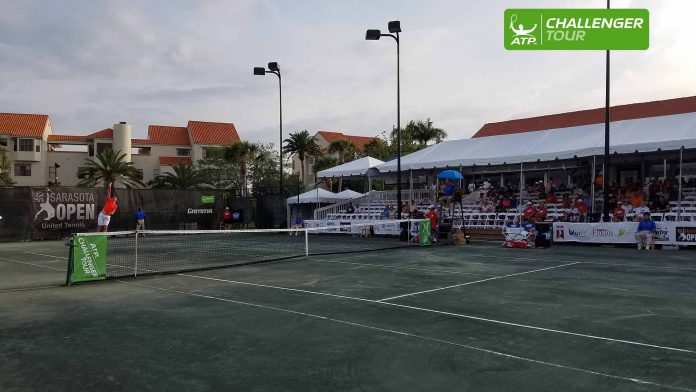 The puzzle of playing clay-court tennis can be challenging for the best players in the world. The balls kick up and bounce differently, movement is often a big factor and the slower pace adds a further tactical dimension to matches.

#NextGenATP players Jared Donaldson and Reilly Opelka are taking this challenge head on, embarking on the clay-court season at the 2017 Elizabeth Moore Sarasota Open in Bradenton, Florida.

Donaldson, at No. 74 in the Emirates ATP Rankings, reached the quarter-finals at the United Tennis Club this week (l. Millot), nearly one year removed from his first final appearance on clay at the 2016 ATP Challenger Tour event in Savannah.

“It’s different for all players, but getting your footing on the clay is important,” said Donaldson’s coach Jan-Michael Gambill, a former World No. 14 and three-time ATP World Tour titlist.

“The fact that Jared went to Argentina (Buenos Aires) for a couple years and trained on clay is in his favour. He already moves quite well on it. One of the things we’re continuing to work on is continuing to make him better with his fitness. Working on his legs and his movement, which has really improved.”

Gambill, who began working with Donaldson at the beginning of the 2017 season, insists once a player understands the complexities of playing on clay courts, then the task becomes less daunting.

“He needs more matches on clay, so Sarasota fits perfectly into our training block before we go over there,” added Gambill. “On clay, there are always strategies to work on like moving further back to return serve because the ball is kicking higher. Sometimes it’s just about understanding the court positioning and that you need to play longer points, but he gets that.”

Since turning professional in 2015, Opelka has played a majority of his matches on the hard courts. However, the 19 year old is willing to put in the hard yards to adapt.

“When I train for clay, I like to practise for two hours and then my coach Diego Moyano will leave and my strength and conditioning coach will come out on court right away. We’ll work for another hour on cardio and movement,” revealed Opelka. “More on clay we’ll do that and work on movement with the medicine ball and also sliding.

“It’s a different concept of how you’re playing. For me, it’s still pretty similar as I’m looking to serve big and it gives me a lot of time to set up balls. My serve is just as effective I’d say. I go for my serve with the same mindset of not letting the back come back. That’s on any surface.”

The towering teenager, standing at 6’11” tall, hopes to close in on the Top 100 by the end of the grass court season in July. He’ll need some breakthrough moments on the red dirt of the European clay, but Opelka is buoyed by the French destinations.

“The green clay in the U.S. is completely different from the red clay. It’s a lot of adjusting every week. I grew up in Florida and only played on clay then. But now there’s only two months a year on clay – four to five tournaments,” said Opelka. “I do enjoy it though, especially going to France is great. I’m playing in Bordeaux in a few weeks and I’m pretty excited to go over there.”

Donaldson and Opelka will both continue their clay-court campaigns in Europe, with Donaldson next slated to hit the red dirt of the Mutua Madrid Open and Opelka seeking to qualify there and compete at the prestigious BNP Paribas Primrose Bordeaux on the ATP Challenger Tour.