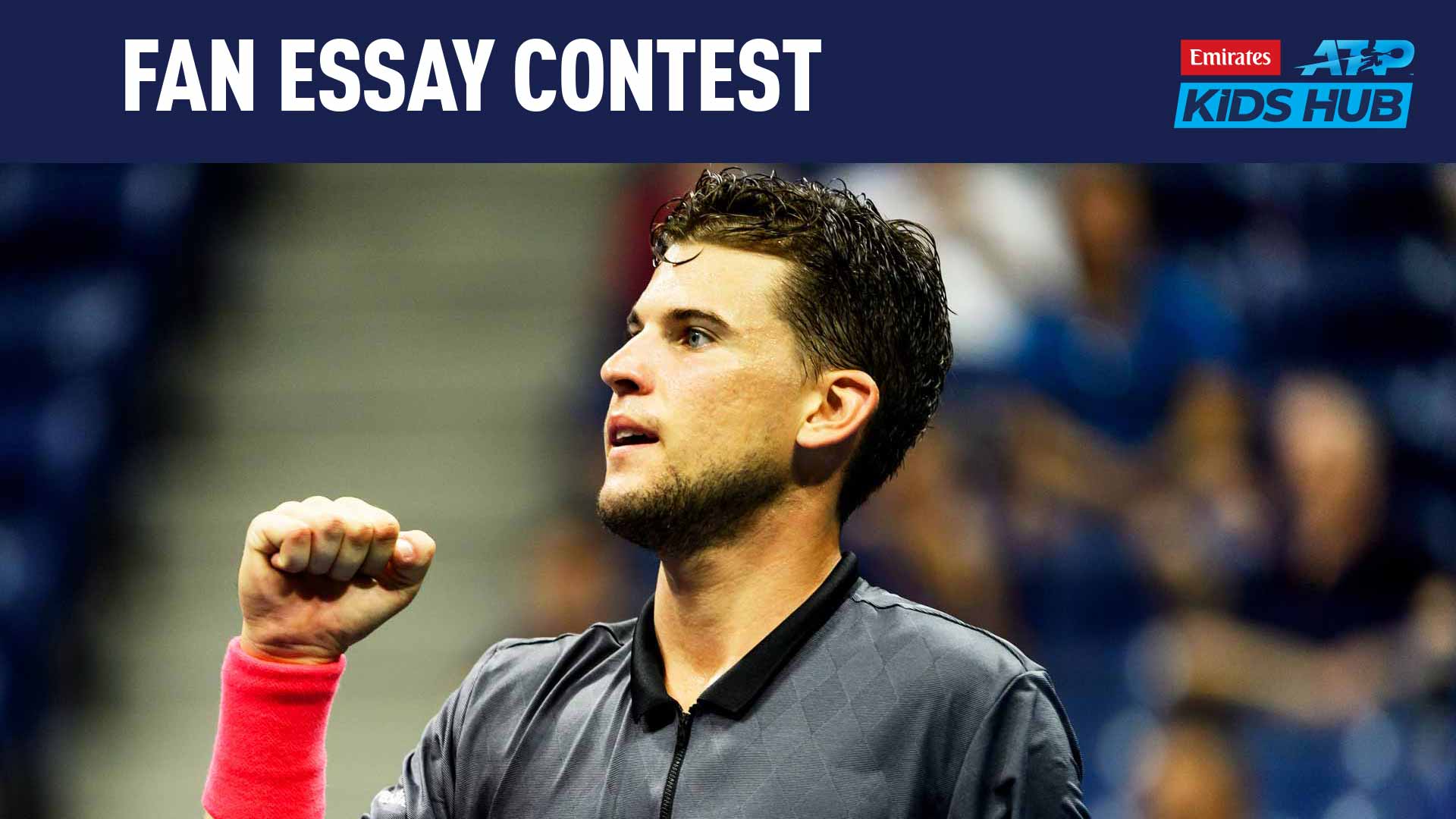 The ATP editorial team had another fun time reading the entries that were sent to us for the third installment of our Fan Essay Contest.

Writers aged 18 and under were challenged to write an essay of 500 words or less on the topic: ‘What is the best ATP Tour match you have seen (either in person or on TV)? Describe why the match was so compelling and why it had a big impact on you.’ The winning entries are featured below.

I root for chaos when I have nothing to lose. Give me David over Goliath every single time. And on 4 September 2018, I once again found myself rooting for chaos.

It was on that night that I found myself glued to my television screen, heart pounding while watching the US Open quarter-final between Dominic Thiem and Rafael Nadal. Of course, I knew Rafa, but what truly impressed me was the man I knew nothing about.

As the match roared on, I found my jaw constantly gaping open and was dumbfounded by just how hard these two warriors were striking the ball. I had seen enough matches in my life to know that this was special. And before I could even wrap my head around the power in their groundstrokes, Thiem won the first set 6-0.

That set hooked me in for the long haul. To call what was to come a classic would be a massive understatement. The match was a complete and utter war, in the stifling New York humidity, with so much sweat pouring from both players that their bodies were glistening. I was completely hooked.

Two amazing sets of brutal, demanding and enthralling rallies later, Nadal was back in the driver’s seat. Up two-sets-to-one, I considered my hope of watching chaos to be nothing more than a pipe dream. Knowing that I had school in the morning and with the fourth set starting well after midnight, I considered heading to bed. My decision not to was one I’m forever grateful for.

Somehow, Thiem won that fourth set, and in the process he forever won himself a fan in me. He may have lost in the end, but that didn’t seem to matter anymore. Finally, after the clock had struck 2:00am and five of the most amazing sets I will ever have the pleasure of watching concluded, it was all over. But for me personally, the journey had just begun.

This match stuck with me and does to this day. It genuinely lit a fire in me and I am thrilled to say it got me onto the tennis court again. My one-hander has quite a bit to go before it reaches the level of Thiem’s. But it’s thanks to that night, where I simply wanted to root for chaos, that I found a new love in the sport of tennis. When “The Dominator” takes the court, I’ll be pulling for the man that made me fall back in love with this great sport.

The Resilience Of Del Potro
By Eluwole Timothy, 17, Ibadan, Nigeria

Scheduled at a late afternoon hour on 4 September 2017, the last fourth-round match at that year’s US Open between Juan Martin del Potro and Dominic Thiem drew tennis fans from around the world into the Grandstand. I watched the match on TV after a training session in my hometown stadium in Ibadan. I had no idea that I was about to watch one of the best tennis matches ever.

The ‘Dominator’ dominated the first two sets and del Potro trailed 1-6, 2-6 after just 72 minutes. The Argentine struggled with a fever and looked feeble and weak. He lacked rhythm, missed routine shots and struggled with his mobility during rallies. Thiem had liberty to fire winners from all angles of the court and had little resistance from his tired opponent. It almost seemed as if del Potro was going to retire and call it quits.

With del Potro’s back against the wall, he inspired hope and found his way into the match by grabbing the third set. His sudden charge changed the atmosphere and gave the match a new vibe.

Both players gave it their all in the fourth set, but it seemed as though Thiem was on his way to victory when he won four straight games to take the lead 5-2. Once again, del Potro found strength from within and fought back tenaciously. He saved two match points by landing two aces and eventually pushed the set into a tie-break. On set point, del Potro leveled the match with a thunderous 116mph forehand.

In the fifth set, the comeback was completed as del Potro broke Thiem in the final game. The victory sent the Grandstand crowd into a frenzy as they erupted in wild celebration. Del Potro spread his hands in joy as he soaked himself in the chants of “Ole Delpo” ringing from the crowd. I could hardly believe what I had just watched. I was so thrilled that I had goosebumps.

The resilience displayed in this match has always been a source of inspiration for me as a tennis player. It reminds me that I can fight illness, low moments and injuries as long as I remain resilient and focused.

There have been moments where I felt very weak and down at tournaments, matches where I had almost lost hope of winning, and this match served as a source of hope for me to get back into games and win them. It still inspires me today and even motivates me in other areas of life to tackle challenges and not lose hope even when the odds are against me.

Game Zverev. A phrase that was like music to my ears.

I settled comfortably on my couch to watch what I thought was going to be the final game of his semi-final at the 2019 Rolex Shanghai Masters. A set and a break up at 6-5 in the second set was a spot where most pros closed out matches with a routine service game. However, I didn’t know if this would be the spot where it would all start to slip for Zverev against Roger Federer.

Mental and physical pressure at this stage of the match and tournament was common to observe as players hit their shots, but never with their body language. It seemed like there was nothing but relaxation and confidence on the faces of both players, which was an aspect I admired and wished I could have during my own matches.

I listened as the umpire called time and both players rose from their chairs. Calm and relaxed as usual, I watched as Federer walked to the baseline ready to do whatever it took to stop Zverev from reaching his first final in Shanghai.

Hoping with all my heart that my favourite player would come through with his big serve, I watched as Zverev leaked unforced errors due to added pressure from Federer. Despite countless amounts of match points, Zverev could not seem to take the match. As Federer managed to break, I felt the anger growing inside of me little by little.

A tie-break was needed and I kept my hopes up for Zverev. Despite the anger I felt about the break that had just taken place, I paid close attention to the situation Zverev had been put in and how he was handling it. Up and ready on his toes, he only looked ready to compete and regain the advantage he lost.

Zverev picked up two more match points in a grueling tie-break, but they didn’t go his way. It seemed like it was Federer’s time to shine as he went up 8/7 and closed the set out with an ace.

Furiously, I closed my device that I was watching on and left my room. But just before this, my eye saw Zverev calmly walking to his chair without any frustration. I asked myself how he could be so composed while I, who was not even involved in the match, was losing my cool.

Shortly after, the news went viral about how Zverev had managed to pull the upset off by defeating Federer 6-3 in the third set. Elated and confused at the same time, I realised my own problem mentally while competing.

Remembering how Zverev walked calmly to his chair after the second set, while I had recklessly turned off my device and left the room, had taught me a lesson. Always evolving while thinking during the match was key.

Keeping my head calm and composed was a struggle I had dealt with when playing in matches and this had cost me dearly. Because of this, whenever a cloudy mind with anger occurred during my matches, my mind would return to the mental toughness that Zverev showed during this semi-final.