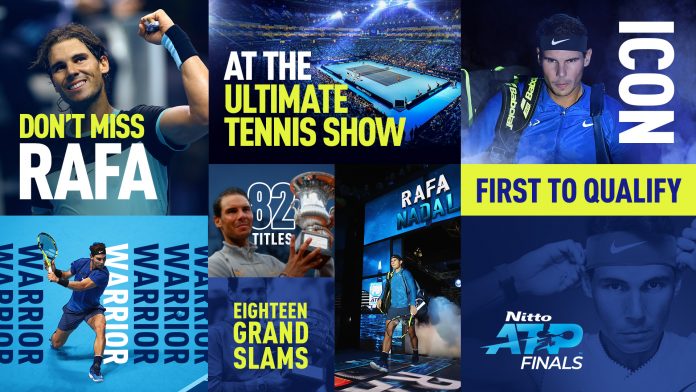 Rafael Nadal is set to return to London later this year after becoming the first player to clinch a spot at the 2019 Nitto ATP Finals, to be held from 10-17 November at The O2. The Spaniard qualified for a record 15th straight season on Wednesday following his quarter-final win over Sam Querrey at The Championships, Wimbledon.

Nadal has gone undefeated since mid-May and will take a 17-match winning streak into his semi-final match against Roger Federer on Friday, as he continues his pursuit of a third singles crown at the All England Club, which would represent his third Roland Garros-Wimbledon title double. Earlier this season, he claimed his ninth Internazionali BNL d’Italia trophy in Rome (d. Djokovic) and celebrated a record-extending 12th Roland Garros triumph (d. Thiem). Nadal opened his 2019 ATP Tour campaign by reaching the Australian Open final, where he finished runner-up to Novak Djokovic, who is currently second in the 2019 ATP Race To London.

World No. 1 Djokovic, who plays Roberto Bautista Agut in the Wimbledon semi-finals, will join Nadal in the Nitto ATP Finals field should he successfully defend his title on Sunday. Roger Federer currently stands in third position in the ATP Race To London, followed by three-time qualifier Dominic Thiem and 2018 Next Gen ATP Finals champion Stefanos Tsitsipas. Kei Nishikori, Bautista Agut and Daniil Medvedev round out the top eight.

The ATP’s crown jewel event is to be held at The O2 in London through to 2020, where it has been staged to wide acclaim since 2009. The event has successfully established itself as one of the major annual sporting events worldwide, broadcast in more than 180 territories with global viewership figures reaching an average of 95 million each year.