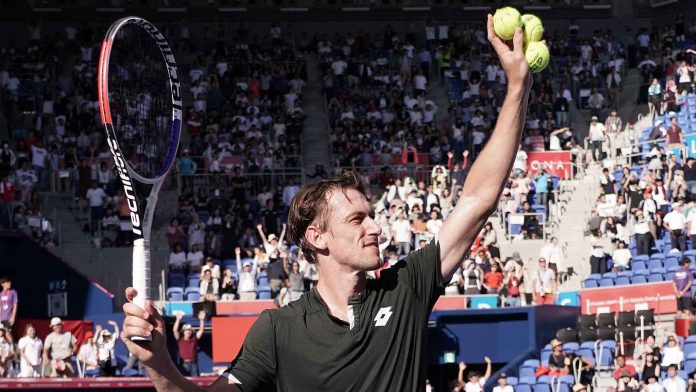 Aussie John Millman hopes that when his career comes to an end, he’ll have snapshots to look back on, moments from his career that he’ll never be able to forget. Whether a big win or a special opportunity, the Aussie cherishes those as much as anything.

The Rakuten Japan Open Tennis Championships final on Sunday will be one of those memorable moments. The 30-year-old will face World No. 1 Novak Djokovic in the 9,500-seat Colosseum at Ariake Tennis Park with his first ATP Tour title on the line.

The World No. 80 just hopes that when he looks back on this snapshot years from now, the image he remembers will be of him lifting the Tokyo trophy.

“Moments like these, battling your way and getting through to the final of an ATP 500, they’re moments that you’ll remember and they’re the ones that people ask you about when you’re away from tennis and for me, that’s why you work hard,” Millman said. “From the very start you’re just a little kid that has a dream to play tennis in the biggest cities in the world. I’m lucky to have done that, but I’m not done yet and hopefully I can create a few more moments at the back end of my career.”

The challenge will be a difficult one. Djokovic is going for his 76th tour-level title, whereas this is only Millman’s second final. Last year, the Aussie reached the championship match in Budapest.

One of Millman’s career highlights came at last year’s US Open, where he defeated Roger Federer en route to the quarter-finals. But standing in the way in the last eight was Djokovic, who leads their FedEx ATP Head2Head series 2-0.

“Novak is really tough. He’s obviously one of the greatest players to have played this sport, in my opinion, in the history of the game. He’s racked up so many titles, so many victories, and he’s just an incredibly tough player,” Millman said. “But I’m in the final, I’ve had to go through qualies, I’ve had to play many matches to get here. I really do feel as if I’m deserving of my spot. I hope to bring my best tennis, a physical brand of tennis, and really just give it all just for one more match.”

In terms of style of play, Millman believes he won’t be uncomfortable. Djokovic excels from the baseline, grinding opponents down and seizing every opportunity he finds to attack. That’s very similar to the way Millman enjoys playing.

“I’m preparing myself for a very physical encounter, and that’s the type of match I like. I like to engage in physical baseline tennis. I probably feel a little bit more comfortable in that type of match than a match like today where it’s just serve and first ball,” Millman said after defeating big-serving American Reilly Opelka. “But it’s going to be incredibly difficult.”

Millman had a weight lifted off his shoulders following the first round of qualifying. In a second-set tie-break against American Bradley Klahn, the Aussie saved three match points, and he has only been getting better since.

“I think it goes to show just how strong men’s tennis is right now. It’s ultra competitive. Every single match has been a bit of a battle, and it’s special,” Millman said. “Sometimes you’ve got to ride your luck a little bit and take those chances. It’s opened up for me and I think every match I’ve gotten better and better. I’ve gotten more used to the conditions out there and it really helps when you’re very comfortable in a country. I’m very comfortable here.

“[Japan has] always been a country where I’ve felt very much at ease coming here. The people make it a really special place and it’s pretty cool that I get to play one more match, and that’s the final.”

Millman’s “love affair” with Japan began nearly a decade ago in Kyoto, where he advanced to the quarter-finals of an ATP Challenger Tour event in March of 2010 with a victory against home favourite Takao Suzuki. Reminiscing on that memory drew a loud “ooh” from the local news media.

“That was a good win to play in the Challenger against Suzuki-san,” said Millman, who has won four Challenger titles in Japan. “I’ve played very good tennis here. I’ve won a fair few titles here, so it’s really sweet to come back and do [this] at the biggest tournament they have.”

Last October, Millman reached a career-high ATP Ranking of No. 33. But entering the Winston-Salem Open the week before the US Open, he owned only 14 tour-level wins on the year. There was plenty of pressure on him to defend the 360 points he earned by making the last eight at Flushing Meadows last year.

But he made the quarter-finals in Winston-Salem to gain some momentum. And despite losing to eventual champion Rafael Nadal in his New York opener, Millman kept it going with his 12th Challenger crown in Kaohsiung, and he has not looked back, pointing to that victory as a key moment. Now, he is in position to potentially earn his biggest win yet.

“The one thing I have done is I’ve stuck at it. I’ve kept my head up. It hasn’t been overly easy and there’s times when you get a little bit flustered with yourself. But if you stick at it, I’ve been through tougher times than that,” said Millman, who has undergone three surgeries during his career. “It wasn’t the be all and end all. I knew that I could create some pretty good opportunities for myself, and I’ve managed to do so… to come here and get all these matches, I’m really happy.”

Humbert Breaks Into Top 50, Mover Of The Week

Isner Pledges 25% Of Prize Money To Bushfire Relief, And That's Not All…

South Africa Today Sport - January 20, 2020
0
We use cookies to ensure that we give you the best experience on our website. If you continue to use this site we will assume that you are happy with it.OkRead more