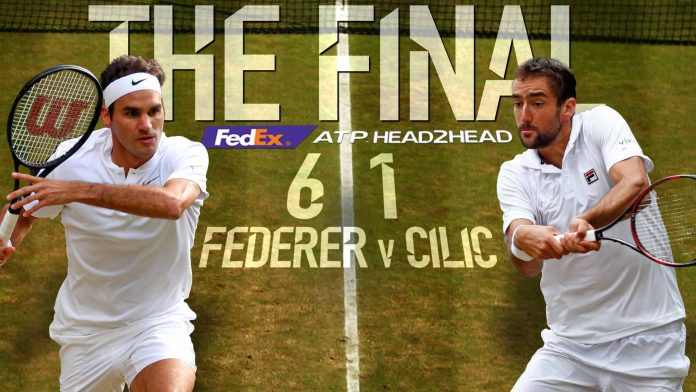 When the 2017 season began, few would have foreseen Roger Federer standing on the doorstep of a second Grand Slam crown and tour-leading fifth title of the year. As Federer continues to etch his name in the history books, the Swiss isn’t just sending a loud and resounding message to the rest of the ATP World Tour, but making the case for one of the greatest seasons of all time.

On Sunday, Federer will look to solidify his standing as the most successful man to ever grace the lawns of the All England Club, when he bids for a record eighth title at The Championships. He carries a 30-2 win-loss mark in 2017 into the final, which will be a record-tying 102nd Wimbledon match (w/Jimmy Connors). Having not dropped a set all fortnight, the 35 year old is not merely turning back the clock with his ruthless run to the final, but proving that he is more dominant than ever.

Employing the same aggressive and authoritative gameplan that saw him lift his 18th major trophy at the Australian Open, seal the Sunshine Double in Indian Wells and Miami, and notch a staggering ninth Gerry Weber Open title, Federer enters the final having dropped just four service games. But another triumph at SW19 won’t be a simple task for the Swiss maestro, with Marin Cilic the last remaining obstacle to Wimbledon immortality.

“I don’t want to say it’s more relaxed going into it because I have a good head-to-head record against Marin, even though the matches were extremely close,” Federer said. “But it’s not like we’ve played against each other 30 times.”

Cilic is surging under the tutelage of Jonas Bjorkman, having reached the semi-finals in ‘s-Hertogenbosch and finished runner-up at Queen’s Club, before storming through a difficult draw for his second Grand Slam final berth. Despite trailing their FedEx ATP Head2Head 6-1, the Croatian will take confidence, knowing he has the blueprint to pull the upset. Cilic routed Federer in the semis of the 2014 US Open, en route to his lone Grand Slam title, and pushed the Swiss to five sets in last year’s Wimbledon quarter-finals.

“But I still know that it’s a big mountain to climb,” said Cilic. “Roger is playing maybe some of his best tennis of his career at the moment, having a great season. So I know it’s going to be a huge challenge. But I believe I’m ready.”

The 28 year old is vying to become just the second Croatian player to win the Wimbledon title, joining Goran Ivanisevic (2001), while bidding to become the sixth active player to stake claim to multiple Grand Slam crowns. He would join Stan Wawrinka and the Big Four of Federer, Novak Djokovic, Rafael Nadal and Andy Murray in the exclusive club. Moreover, victory for Cilic would break the stranglehold of the Big Four on the Wimbledon title, becoming the first player outside the quartet to win the title since Lleyton Hewitt in 2002.

“I would say that I’m now in a little bit of a better form, maybe just slightly mentally stronger, maybe learned a few more lessons, valuable lessons,” said Cilic, also reflecting on his win in New York. “But still it’s a final. It’s never easy to deal with it. You never know how your emotions are going to be when you enter that Centre Court.

“I’m believing that I have the ability and that I have a good game and I played really well during the tournament. That is obviously very important in giving me a lot of confidence to prepare for this final.”

“I thought he played very well,” Federer added, referring to Cilic’s victory at the US Open three years ago. “The conditions were fast. He was clocking returns and serves at will. He was doing a great job. I think I had a minor chance at one point maybe in the third set. Just the way he was playing, he was confident and feeling it and seeing it. It was very impressive.”

Most Attempts Before Winning Wimbledon

*Note: Marin Cilic is attempting to win Wimbledon in his 11th appearance

Emirates ATP Rankings implications abound on Sunday, with Federer poised to rise to No. 3 with the title – his first Top 3 standing in nearly a year. Cilic, meanwhile, is hoping to move to a career-high World No. 5 with a win. He would become the first Croatian to feature in the Top 5 since Ivan Ljubicic in 2007.

One of the biggest factors that could play a significant role on Sunday is physical stamina. While both players take pride in their conditioning, Federer has spent just under 10 hours on court (9:56) during the fortnight, while Cilic has needed an additional four and a half hours (14:28) to reach his first Wimbledon final. Should the Basel native continue the trend and win in straight sets, he will become just the second player in the Open Era to win the grass-court crown without dropping a set, joining Bjorn Borg (1976). Federer has won a major crown without relinquishing a set only once, at the 2007 Australian Open.

“Of course I’m going to try to play within myself,” Federer continued. “I have to play offensive. If you give Marin now time on the ball, he can finish points nicely. The court is still playing quite fast. It helps on my serve, but it also helps him. I’m sure it’s going to be a close match.”