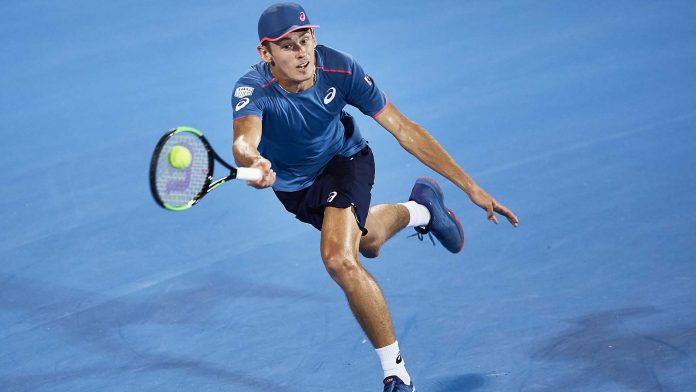 The 19-year-old, who improves to 9-2 at the event, is the youngest winner in Sydney since mentor Lleyton Hewitt claimed the title in 2001. Sydney-born De Minaur is the first Australian champion at the tournament since Bernard Tomic in 2013. It marked the young Australian’s second victory of the day after beating Gilles Simon in a semi-final pushed into Saturday by rain.

In his second straight Sydney final, the fifth seed won 75 per cent of first-serve points (45/60) to improve on his runner-up finish at the event in 2018. Ranked No. 167, De Minaur made a shock run to the championship match 12 months ago, falling in three sets to Daniil Medvedev.

Last year, De Minaur also reached the Citi Open final (l. to A. Zverev) and the Next Gen ATP Finals championship match (l. to Tsitsipas) in a breakthrough season. The Australian rose from No. 208 to No. 31 in the ATP Rankings and was named ATP Newcomer of the Year after earning 28 tour-level victories throughout his 2018 campaign.

After conceding an immediate break of serve in the opening game of the match, De Minaur levelled the set at 3-3 with great anticipation and court coverage. The set appeared to be heading towards a tie-break until De Minaur broke in the 12th game to take a one-set lead, attacking Seppi’s forehand to extract errors and earn short balls from his opponent.

Once again, Seppi was the first to strike in the second set. The Italian earned his first break point of the set with sharp reactions before capitalising on a double fault from his opponent to lead 4-3. But De Minaur immediately responded, breaking back for 4-4 as Seppi misfired groundstrokes on consecutive points. In the tie-break, De Minaur recovered from a mini-break down on three occasions, before clinching the title on his first championship point as Seppi fired a backhand into the net.

At 34 years of age, Seppi was bidding to become the oldest Sydney champion since Mal Anderson in 1973. In his 12th appearance at the event, the World No. 37 was aiming to lift his first title since the 2012 VTB Kremlin Cup (d. Bellucci).

Did You Know?
Since the start of the 2018 ATP Tour season, De Minaur has reached a career-high ATP Ranking on 19 occasions.