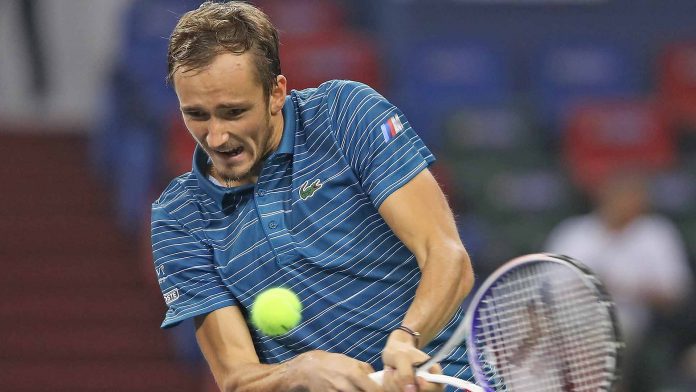 Russian Daniil Medvedev improved to 25-3 in his past 28 matches on Tuesday at the Rolex Shanghai Masters, breezing past Briton qualifier Cameron Norrie 6-3, 6-1.

“It was a great match. As I say, it’s never easy to play a qualifier. [It] was my first match here in Shanghai after few weeks without a tournament finally, so I was a little bit even stressed about my level, but finally I managed to show a really good level, get out from there in less than one hour. Really happy and looking forward,” Medvedev said.

He sprinted to a 4-1 lead in the opening set and never let up, breaking Norrie three times in the second set to cruise in only 55 minutes. The Russian, who leads all players with 55 wins and eight finals in 2019, is trying to reach his sixth consecutive final. He last played at the St. Petersburg Open, where Medvedev won his first title on home soil.

“I don’t feel invincible, because I still lost some matches. If I would have won, let’s say, five tournaments in USA that I played, then I would tell you, ‘Yeah, maybe I am,’” Medvedev said. “I’m trying my best to keep the form I have. It’s really not easy, because as soon as you relax a little bit, the results will start to fall. That’s why I’m trying not to relax. I’m practising as hard as I can and playing my best in the tournaments also.”

By reaching five consecutive finals (Washington, Montreal, Cincinnati, US Open, St. Petersburg), Medvedev joined the last four players to finish No. 1 in the ATP Rankings going back to 2004, who all have reached five or more consecutive finals in their careers.

The US Open finalist will next meet Canadian qualifier Vasek Pospisil, who has been on a serving tear in China. The 29-year-old Canadian has dropped only three first-serve points in his first two matches.

Pospisil underwent back surgery on 18 January and missed the first six months of the season. He had only one tour-level win – a first-round upset of No. 9 Karen Khachanov at the US Open – before this week.