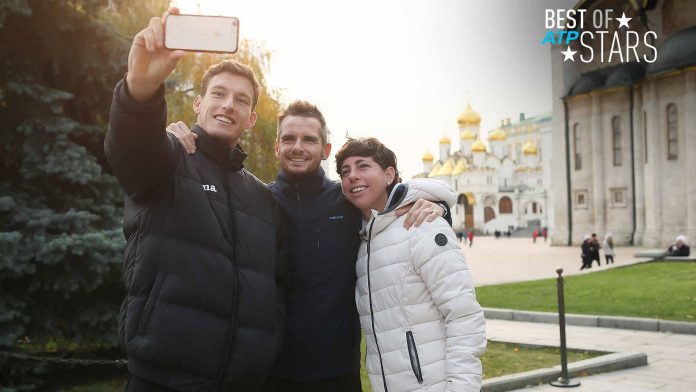 Follow all the latest off-court action on MyATP! Download the app for iPhone or Android and visit MyATP.com

All main draw players were treated to a special night during the Official Kremlin Cup Opening Party at Duran Bar, featuring live music, speeches and a sit-down dinner to kick-off the event.

Belgium’s David Goffin and Steve Darcis took on Benoit Paire and Sebastien Grosjean of France in the European Open Pedalo Cup, a friendly paddle boat competition in the port of Antwerp. The Belgians were first to cross the finish line, with Nick Kyrgios waving the black and white checkered flag. Afterwards, the group participated in a press conference in the port house and office building.

Goffin also enjoyed a walk around Antwerp before taking in the view from high up in the Antwerp Cathedral, where Maui Jim presented their new collection to the top Belgian.

Kyrgios and Frances Tiafoe were just a few of the players who enjoyed a laid-back night Monday, as the tournament hosted a player’s cocktail to kick off the week.

Brothers Elias Ymer and Mikael Ymer took part in the opening ceremony on Sunday at their home country tournament.