The last 2 weeks the controversial topic of land expropriation without compensation has been much debated. For years the ANC/EFF have been misleading the public and the international community with misleading statements that whites own 80% of the land.

In November 2017 the Land Audit Report of land ownership was released by the government.

If you look at the real figures about REAL LAND OWNERSHIP it is undeniably clear and very apparent that there is a more sinister motive behind the whole issue about the much debated land issue.

The ANC/EFF is deliberately misleading its citizens on land ownership. Unfortunately our lib-bully leftist media is also playing their part in this misinformation exercise. They are using an emotive issue with misleading figures to raise racial tensions and conflicts. The ANC/EFF are masquerading as the saviours of the black people and they claim that the whites are thieves that stole the land.

The so called land restitution is used as a ruse to mask a more sinister plot. Our government is waging war against their own citizens and they are affecting a communist coupe to take control of all land in South Africa. They are using our citizens as pawns to do their dirty work in a proxy war.

Unfortunately there will be no winners in this war, except the ANC/EFF. Nobody, not white or black, will own any land. And while our citizens are busy debating and fighting over the land issue, they are also successfully subverting the attention away from the corruption and theft that amounts to Billions. So, while the citizens are busy fighting amongst each other, our government officials are leisurely feeding at the trough of greed.

Unfortunately, thousands of innocent white lives have been lost, especially white farmers, as a result of this misinformation on the land issue. It is now time that the records are set straight once and for all. We encourage everyone to share this far and wide.

I have studied the November 2017 Land Audit report which has been so grossly misrepresented by poor quality journalists and I now present the real data below:

Land ownership is divided into state ownership and also in the following categories of private ownership:
• Individuals
• Companies
• Trusts
• Community Based Organizations
• Co-ownership

The state (national, provincial and municipal) and all other non-private ownership (including the Ingonyama Trust in KZN) accounts for 28.12 million hectares of land.
This is equivalent to 23% of the total 122 million hectares of land in South Africa.
The remaining 77% is held by the above mentioned categories of private owners.
Companies will include everything from large conglomerates, mines, factories and businesses registered as companies.
• The total land owned by the Companies category of owners is 23.2 million hectares, or 19% of SA.

This private individual ownership of SA was subdivided into ownership of
1. farms and agricultural holdings
2. erven
3. sectional title properties.
Ownership was further classified according to race as white, African, coloured, Indian, other and co-owned.
Race was determined through the ID number of the owner on the title deed, matched with data held by StatsSA from the 2011 census.
Where race could not be determined, ownership was classed as “other”.

These are THE REAL FACTS taken from the government’s own Land Audit report.

It is indisputable that white owners can be linked to ONLY 22% of South Africa’s land.

Please note: The above information is courtesy of: www.uncapturedsa.co.za
Written by: William Pulles on 14th March, 2018 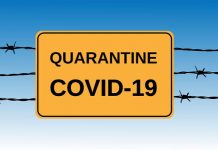 FF Plus intervenes at poor quarantine situations, Upington and Lephalale

Beware these fake claims about Covid-19