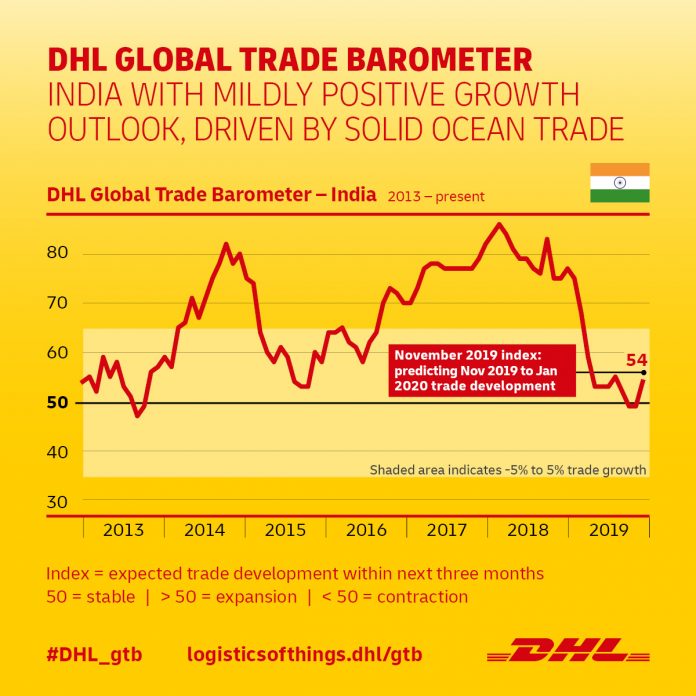 MUMBAI, INDIA – Media OutReach – 6 December 2019 – Strong ocean imports and exports will sustain India’s trade growth over the three-month period ending in January 2020, making it the only country out of the world’s seven largest economies with a positive trade outlook according to data from the DHL Global Trade Barometer released by DHL, the world’s leading logistics company.

“India has the strongest trade forecast this quarter and the highest index value of all countries in the latest Global Trade Barometer survey, followed closely by the United Kingdom and Japan,” said Niki Frank, CEO, DHL Global Forwarding India. “This highlights the underlying potential of India’s economy, which will benefit from the government’s plan to invest US$1.39 trillion (€1.26 trillion) in infrastructure projects. The country’s commitment to establishing itself as a strategic maritime hub with initiatives and investments in coastal infrastructure appear to be supporting the Index’s positive ocean trade outlook and will likely also contribute positively to longer-term trade growth.”

Steady but mild decline negatively affects all countries, except India

The Barometer’s results also suggest that world trade is expected to continue at moderate pace but further contract for the next three months, driven by minor decreases in both air and containerized ocean trade. Against previous quarters this year, the downward trend in trade growth remains mostly stable, neither indicating an acceleration of the decline nor a bottoming out of contractionary movement. All seven nations monitored by the Barometer received indexes below 50 points except for India, where the Barometer forecasts moderate growth of five points to 54 points for India. While Japan and the UK had been the only countries with positive trade outlooks in the previous update in September, the two countries record the highest losses in this period.

“According to the DHL Global Trade Barometer the year will probably end with moderate world trade. However, we’ve to bear in mind where we come from: The rapid growth world trade has undergone in recent years was like climbing the Mount Everest. Now, we are on the descent, but we are still breathing altitude air”, Tim Scharwath, CEO of DHL Global Forwarding, Freight, says. “A countless number of stable trade relations continues to flourish worldwide, despite smouldering trade conflicts and geopolitical uncertainties.”

About the Global Trade Barometer

Launched in January 2018, the DHL Global Trade Barometer is an innovative and unique early indicator for the current state and future development of global trade. It is based on large amounts of logistics data that are evaluated with the help of artificial intelligence. The indicator is published four times a year and the next release date is scheduled for end of March 2020.

For more information on the DHL Global Trade Barometer, please visit:  logisticsofthings.dhl/gtb. The index is now also available for subscribers of the Bloomberg terminal by using the code “DHLG <GO>”.

[1] In the Global Trade Barometer methodology, an index value above 50 indicates positive growth, while values below 50 indicate contraction.

[2] Click here for more information on the outlook for air freight and ocean freight or the key sectors in India.

The proposed Regional Comprehensive Economic Partnership (RCEP) will boost market access to products and capital, and create the world’s largest regional trading bloc that will account for more than 29.1 percent of global trade. Read more about Asia’s next trade pact and its impact on global trade.