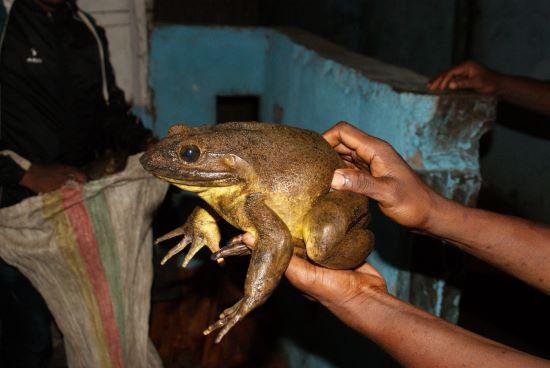 The world’s largest known living frog species doesn’t build ordinary nests. It does a lot of heavy lifting, sometimes moving large stones and rocks weighing more than half its weight to create dammed ponds on sandy riverbanks that serve as nesting sites, a new study has found. This high-effort nest-building behavior could also be why the frogs grow so big, researchers say.

Found along streams in rainforests across southwestern Cameroon to Equatorial Guinea, the goliath frog (Conraua goliath) can reach up to 34 centimeters (13 inches) in length, not counting its legs, and weigh up to 3.3 kilograms (7.3 pounds). The species is also endangered, mostly because of hunting for food and habitat loss. Yet despite its fame as the largest frog in the world, researchers know very little about its biology.

It was while conducting fieldwork in Cameroon that researchers first heard of the goliath frog’s nest-excavating behavior from the local people who hunt the amphibians to eat. Intrigued, the researchers from Germany and Cameroon surveyed a 400-meter (0.25-mile) stretch along the Mpoula River near the city of Penja in western Cameroon between February and May 2018, and found 22 potential goliath frog nesting sites, 14 of which had eggs attached to rocks, stones, or branches on the ground. In two of the nests, the team counted around 700 eggs in just one quarter of each nest, and estimated that they had around 2,700 to 2,800 eggs each.

While a couple of the 22 nest sites were located in pre-existing depressions on rocks within the riverbed, some were in shallow pools that the frogs seemed to have enlarged by digging and clearing out leaf litter and other sediments.

There was a third kind of nest: shallow, cleaned-out and water-filled pool on sandy or gravel ground, surrounded by large stones and rocks that had visibly been moved recently. The researchers could infer the latter from surfaces of stones that had been turned upside down — surfaces formerly in the ground were now exposed, for example.

While the researchers did not directly observe the frogs constructing most nests, the presence of clean ponds with edges made of large, recently moved stones suggest that the frogs had pushed the rocks to the pond’s edge, they say. By contrast, nearby pools always had “thick layers of leaves, debris and heterogeneous sand or gravel ground,” they write in the paper.

In fact, all three kinds of nests had a common thread: a ground that had been cleaned out, with the excavated debris piled up on the edges of the nests. Nests in the dammed ponds, however, appeared to offer more protection against overflooding that can cause eggs to be washed away.

“The little ponds they make at the edges of fast-flowing rivers provide their eggs and tadpoles with a safe haven from sometimes torrential waters, as well as from the many predators living there,” study lead author Marvin Schäfer, of the Berlin Museum of Natural History, said in a statement.

Schäfer and his colleagues say they think that the physical labor the goliath frog puts into excavating a large nest and moving rocks may explain why the species has become the largest frog species in the world.

“Digging out a nest that exceeds 1 m [39 inches] in diameter and 10 cm  [4 inches] in depth, by moving coarse gravel and stones of several kilograms, is a serious physical task, and suggest a potential explanation for why Goliath frogs are among the largest frogs in the world,” the researchers write.

There’s still a lot that the team does not understand about the frog’s reproductive behavior, though. For example, it is unclear whether it is the male or the female that makes the nest. An infrared time-lapse camera that the researchers installed showed an adult frog of unknown sex sitting or moving around the nest all night until dawn, possibly guarding it from predators. When a second large frog approached the nest briefly, the frog sitting in the nest didn’t react much.

The researchers also interviewed some frog hunters, one of whom said he had observed the male goliath constructing a nest while the female waited nearby. Once the nest is done, the male reportedly whistles to attract the female, then grasps it until the female deposits eggs into the nest. Later, the female continues to guard the nest.

“The fact that we’ve only just discovered these behaviours shows how little we know about even some of the most spectacular creatures on our planet,” Mark-Oliver Rödel, a study co-author and herpetologist at the Berlin Museum of Natural History, said in the statement. “We hope that our findings, combined with further ongoing research, will improve our understanding of the needs of the Goliath frog so we can help support its continued survival.” 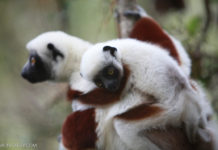 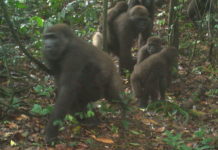 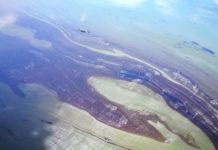