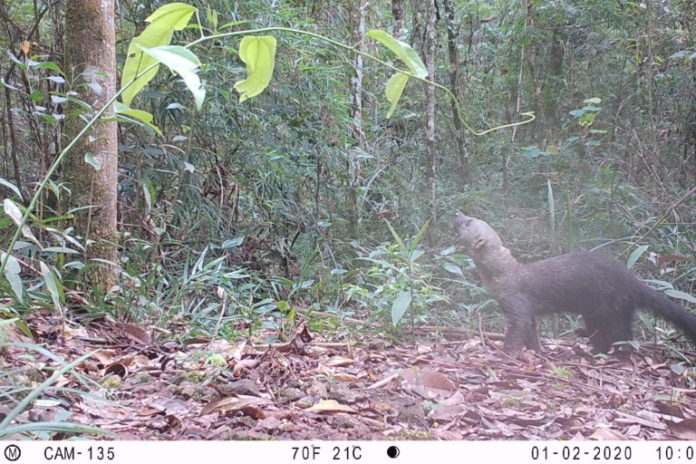 Camera traps bring you closer to the secretive natural world and are an important conservation tool to study wildlife. This week we’re meeting the tayra.

Tayras are part of the weasel family and they are found from Mexico to northern Argentina, including the island of Trinidad. Even though they live in tropical and subtropical forests, tayras can live near humans; so they can cross grasslands to move between forest patches, and also inhabit croplands. They are about the size of a medium-sized dog with males being larger and slightly more muscular than females. Tayras have a long and slender body with short dark brown to black fur. Their heads are robust and paler and their chests have a yellowish spot that researchers use to identify individual animals. Tayras are opportunistic omnivorous animals which means that even though they prefer small mammals, like the spiny rat, they will eat whatever is available; for example, fruit, invertebrates and reptiles. They will also climb trees to get honey. Tayras are listed as Least Concern by the IUCN but have a declining population. They are threatened by loss of tropical habitat mainly due to agricultural expansion and they are also hunted for the pet trade. Watch the video to learn more about this species!

Special thanks to Paula R. Prist and WWF-Peru for sharing this camera trap footage with us. Paula Prist is a biologist that focuses on how landscape structure affects the transmission risk and the occurrence of zoonotic diseases, and how to manage landscapes to make them “healthier” for people. Her camera trap footage was part of a project investigating how landscape structure affects the occurrence of medium-sized and large-bodied mammals in Brazil. The camera trap footage of the WWF-Peru, on the other hand, was obtained from a camera trap monitoring survey designed to estimate the spectacled bear (Tremarctos ornatus) and Mountain tapir (Tapirus pinchaque) distributions in the montane cloud forests of the Tabaconas Namballe National Sanctuary in Peru.

These questions can help provide a framework for exploring the topics presented in this story.