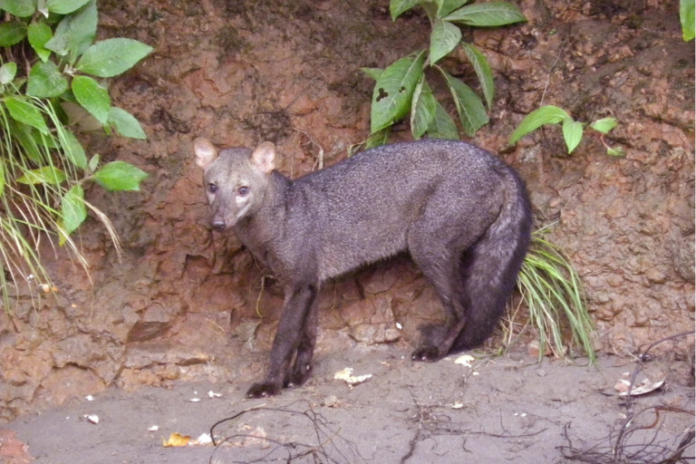 In 2016, conservation biologist Holly O’Donnell was striding through the Amazon rainforest in southwestern Peru, recording every mammal she saw or heard while performing a line transect survey for the Peruvian NGO Fauna Forever. A few minutes into her walk, she smelled something fetid. Following the scent several meters off the trail, she found the carcass of a nine-banded armadillo (Dasypus novemcinctus), which may have died due to a recent cold weather event called a friaje.

She hurried back to Fauna Forever’s camp at Las Piedras Amazon Center to get a spare camera trap, and installed it near the dead armadillo. She hoped to capture a wild cat like an ocelot (Leopardus pardalis) or a jaguar (Panthera onca) preying upon the carcass, but mostly expected to see vultures.

A couple of weeks later, O’Donnell retrieved the memory card from the camera. As expected, she found clip after clip of vultures pecking at the armadillo. But then she saw something unexpected: A short-eared dog (Atelocynus microtis) darted past the lens, sniffing and nibbling at the carcass.

“I didn’t believe it at first,” O’Donnell, a researcher at the University of Oxford’s Wildlife Conservation Research Unit (WildCRU), told Mongabay in an interview. “[I thought] it can’t be a short-eared dog, it must be wrong. Maybe it’s a pet … but no, it was [a short-eared dog].”

O’Donnell’s disbelief was justified. Short-eared dogs, a near-threatened species endemic to the Amazon Basin, are notoriously elusive, making them a difficult species to study. At Fauna Forever, O’Donnell helped collect camera trap video through the Amazon over a year and a half, but she never recorded another short-eared dog for that entire time.

The species’ evasive nature has translated into a dearth of scientific research. Some field studies on the short-eared dog, the only species in the Atelocynus genus, started to emerge about 20 years ago, but little is known about the species’ biology and ecology. There’s also limited information on the animal’s diet, with most records indicating that it mainly eats fruit and live prey. Anecdotal reports suggest that short-eared dogs also scavenge for food, but none of these incidents had been officially recorded — until now.

O’Donnell went on to publish a field report in Canid Conservation & Biology, which she says is the first published record in a peer-reviewed journal of a short-eared dog scavenging an armadillo.

“[There’s been] absolutely nothing on armadillos,” O’Donnell said. “I think that’s definitely a fresh record.”

According to the report, it’s still not clear whether short-eared dogs commonly scavenge on armadillos, or if the individual in the footage had just opportunistically preyed upon the carcass during the cold weather event.

“The cold weather event could be a complete coincidence, it really might have no relation to the event at all,” O’Donnell said. “Or maybe it does. It can be really interesting to go out and … do a field dietary study … to see what they eat and when they eat at different times of the year.”

Sean McHugh, a wildlife biologist and conservationist who studied mammalian carnivores, including the short-eared dog, while working for conservation research organization Operation Wallacea, says he believes the short-eared dog was feeding opportunistically. “I think given the opportunity to feed on fresh meat, it will take that opportunity,” he told Mongabay in an interview.

In 2018, McHugh baited a camera trap in the Ecuadoran Amazon, and ended up capturing video of a short-eared dog, which was later featured on Mongabay’s Candid Animal Cam. “The short-eared dog came in and basically consumed almost the entire piece of this meat scrap that I bought from the butcher in town,” he said.

With this in mind, McHugh says he isn’t very surprised by the findings of the field report.

Renata Leite Pitman, a leading researcher on the short-eared dog, also said she is not astonished by the incident, having baited short-eared dogs with peccary intestines for research purposes. However, she says this report is significant due to the distinct lack of documentation on the species.

“When I started to study it 20 years ago, there were only two field reports published on the species, one documenting the species eating a rat, and another about one trying to hunt a paca,” she told Mongabay in an email. “Holly is not just reporting the fact that the animal is scavenger, but also presenting one more location where the species is found … and the fact that it was an armadillo.”

O’Donnell says she hopes to conduct doctoral research on the short-eared dog to try and fill the lacunae of research.

“I’d want to do a full scat survey to determine diet inside and outside of protected areas and across seasons,” O’Donnell said in an email following our interview. “GPS collars to determine range (suspected to be large which puts them at much greater risk), home ranges, activity patterns, social behaviour. We don’t even know how many there are. There has been one occupancy study in Brazil. No density estimations.”

She added: “As a conservationist, I think it is vitally important to understand the basic ecological needs of a medium-sized mammal, a canid, which lives in a very threatened habitat.”