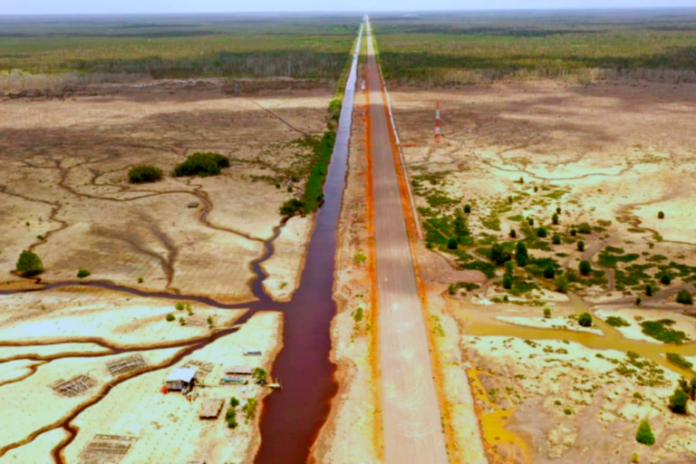 OGAN KOMERING ILIR, Indonesia — Over the past two decades, much of the forests in Ogan Komering Ilir district in southern Sumatra, Indonesia, have been cleared to make way for vast pulpwood plantations. The acacia and eucalyptus trees grown here are turned into pulp to make paper and related products, and an entire industry has sprung up around these plantations: spanning from the mill that pulps the wood, to the port from where the pulp is sent to other parts of Indonesia and abroad.

At the center of the industry here sits Asia Pulp & Paper, or APP Sinar Mas, whose local subsidiary, PT OKI Pulp & Paper Mills, aims to be the largest pulp and paper producer in Asia. It owns the mill and the port, and now plans to upgrade the road linking the two at a cost of 2.8 trillion rupiah ($190 million).

The existing road already cuts through peat and mangrove forests, which constitute an important habitat for the critically endangered Sumatran elephant (Elephas maximus sumatranus). The company has promised the upgrades will not require further clearing of these areas, but conservationists have called for the least destructive and invasive construction if the project stands to continue.

The pulp mill was built by PT OKI Pulp & Papers Mills in 2012 on a 1,700-hectare piece of land by the Baung River in Ogan Komering Ilir. It has been in operation since 2016 with a target annual production of 2 million tons of pulp and half a million tons of tissue paper. The company has also built an offshore port on the district’s Tapa Bay, to export its products. The two facilities are located some 57 kilometers apart, and the company wants to upgrade the existing road that connects them as it aims to be the largest producer in Asia.

As it currently stands, the road between the mill and the port goes through peat, mangrove and elephant habitat on the eastern coast, especially in the Sugihan landscape. “We realize that the road that stretches from west to east in the Sugihan landscape will more or less affect the movement of the elephants,” Dolly Priatna, head of the landscape conservation department at APP Sinar Mas which is the parent company of PT OKI Pulp & Papers Mills, told Mongabay recently.

As early as the 1970s, the coast used to have high biodiversity, also hosting the critically endangered Sumatran tiger (Panthera tigris sumatrae), and was free from human settlement and plantations.

But government transmigration projects and the expansion of industrial plantations in Sumatra have exponentially degraded the ecosystem all over the island. By 2004, official data showed that some 586,975 hectares of land in Ogan Komering Ilir, or about a third of the district’s total size, have been converted into industrial pulp plantations. Wildfires have also been reported annually in the Sugihan landscape which spans along the eastern coast of South Sumatra province.

Now, the local conservation agency records that at least 148 wild Sumatran elephants live in small groups in the Sugihan landscape. Some of them are often reported to be seen in these industrial pulp or palm plantations.

APP’s Dolly said that an internal team from the company had conducted an analysis of the elephant population, and would discuss the findings with the conservation authorities and experts in South Sumatra to find a solution on how to keep the animals within the same landscape.

“This is to guarantee that the elephant populations in the Sugihan landscape will survive in the long term,” Dolly said, adding that there are three sites along the planned road that elephants have used to move around.

Dolly said that the company has prepared strategies to reduce the impacts of road development to the elephants, including building an underpass as a wildlife corridor or setting up traffic features to warn drivers of the animals passing.

He added that plantation owners in the landscape have so far managed to ensure the protection of the elephants. “This can be proven by the fact that a new elephant baby is recorded every year. If they were stressed or lived uncomfortably, they would postpone or cease elephant births,” Dolly said.

Much of the road, a 45-km (28-mi) stretch, is operated by PT Bumi Andalas Permai, a supplier to PT OKI Pulp & Papers Mills, according to APP Sinar Mas. The remaining 12 km (7 mi) will be designed as an overpass along a canal in a former logging concession, beside a mangrove forest.

Conservationists have called for the environmental impact of the road upgrades to be kept to a minimum.

“The development of the eastern coast in Ogan Komering Ilir district is happening very fast, not just for palm and pulp plantations, mills, but also for other supporting infrastructure, including new settlements, roads, bridges and others,” said Yusuf Bahtimi, a researcher at the Center for International Forestry Research (CIFOR), who has studied the elephant population in the region.

“It’s very likely that we will lose the elephants in this landscape in the future,” he said.

Muhammad Hairul Sobri, director of the South Sumatra chapter of the Indonesian Forum for the Environment (Walhi), said it was also important to retain the mangroves.

“It’s not impossible that the area will be drowned if there isn’t any barrier left to protect against [rising] seawater,” he told Mongabay.

He said he hoped the planned road upgrades wouldn’t lead to the construction of more infrastructure, such as warehouses, or public settlements in peat or mangrove areas.

“The authorities must really pay attention to and anticipate this possibility happening in the future,” Hairul said.

PT OKI Pulp & Paper Mills has pledged that the road project will not clear any peat or mangrove. The company also has carried out mangrove restoration projects on previously burned sites.

“It won’t change any peat land or mangrove forest at all,” Gadang Hartawan, the company’s head of public affairs, told Mongabay. “We are optimizing what already exists, and not changing land or forest.”

This story was first reported by Mongabay’s Indonesia team and published here and here on our Indonesian site on Aug. 21 and 22, 2020.