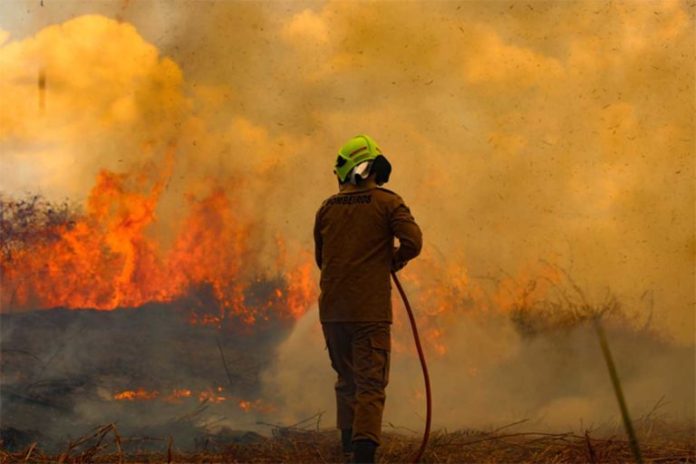 With more than 1,000 major fires already detected this year across the Amazon, impacting the rainforest and Indigenous and traditional communities, scientists are offering a sliver of hope to land managers seeking to curb future fires as new satellite data technologies come online.

For the last month, a single massive wildfire has burned in the Amazon understory, claiming as much of 24,994 hectares (61,762 acres) of pristine rainforest in an area sandwiched between the Jamanxim National Forest and the Baú Indigenous Territory in Pará state, Brazil — both of which are protected areas long subjected to invasions by land grabbers who regularly use fire as a tool to clear and steal public land.

Just this one fire will send almost 3 million tons of carbon into the atmosphere over the coming years as the charred trees die off and decompose, according to new data from a recently launched NASA Amazon fire tool. That’s the equivalent in emissions of 700,000 cars driven for one year.

But here’s the silver lining: as recently as last year, scientists couldn’t have known all of this. Amazon fires have in the past typically been tracked by counting hotspots, which can’t account for the number or size of actual fires, the precise area impacted, carbon emissions, or the kind of fire. While some systems combine hotspot data with aerosol data and other information, none could offer all this information automatically in near real time — until now.

The new Amazon Dashboard fire monitoring tool, initiated August 19 by NASA, boasts some major advances over the way fires were monitored in the past. The platform utilizes automated data collection and computer analysis to identify the number of significant fires burning in the Amazon (instead of just hotspots), what type of fires are burning, and how many new fires start each day. Carbon emissions are counted too.

“As valuable as active fire information is to track monthly or yearly differences, it’s an incomplete picture of what is going on,” Douglas Morton, the chief of the Biospheric Sciences Laboratory at NASA’s Goddard Space Flight Center responsible for the new tool, told Mongabay.

“Our team wanted to be able to provide more context about the types of fires burning, and the size and growth of those fires over time. Those are critical attributes in terms of the potential to suppress those fires in remote locations.” The new system differentiates fires burning in deforested areas (usually set illegally to convert forest to agricultural land), those burning in the rainforest understory, grassland blazes, and fires set by subsistence farmers annually to clear existing fields.

Understory forest fires — one of the most destructive types of Amazon fire — have gone almost entirely undetected in previous years, as satellites were unable to “see” them. With flames often less than a meter high, understory forest fires seep into dense foliage, burning a trail across the forest floor, often hidden completely by tree canopies towering 40 to 50 meters overhead.

NASA’s quickly accessible and pinpointed data can help land managers identify and suppress forest fires in remote locations before they get too big, while also helping expose perpetrators of large-scale arson. The filtering out of fire used on small-scale family farms and in traditional communities allows enforcement operations to focus exclusively on fighting large-scale criminal deforestation networks, and in preventing and combatting forest fires in high-risk areas.

“It’s groundbreaking. A revolution in our field. We could stop these forest fires and respond quickly,” said Erika Berenguer, a biologist and Amazon expert at Oxford University. “We can [now] separate fires coming from deforestation and agriculture from forest fires, which are much more difficult to detect. In truth, we don’t know how much fire escapes [from newly deforested areas or fields] into the forest, but it’s a considerable proportion.”

Mongabay has also created its own fire dashboard based on MAAP data, which is regularly updated for use in our stories: