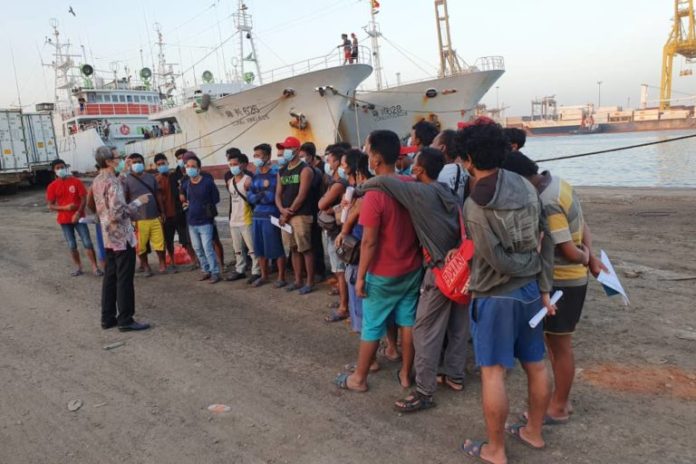 JAKARTA — Eighty-eight Indonesian sailors have recently been repatriated from a notorious Chinese fishing fleet where six of their compatriots died under harsh working conditions.

The Indonesian Foreign Ministry announced the return of the crew members in three batches — on Oct. 27, Nov. 3, and Nov. 10 — from Dakar, Senegal, where they had been stranded. The men had worked on board seven boats owned by Dalian Ocean Fishing, a major Chinese tuna-fishing company that supplies the Chinese and Japanese markets.

News of the crew members’ repatriation comes after an initial batch of 155 Indonesian sailors and the bodies of two others arrived on Nov. 7 at a port in Bitung, North Sulawesi. They had worked on board 12 DOF vessels.

The latest arrivals bring to 257 the number of Indonesian crew members repatriated this year alone from DOF vessels. In addition, six deaths have been reported.

It’s not clear why the Indonesian crews of these vessels are being repatriated; the Foreign Ministry called it a follow-up to two bilateral meetings between Indonesian and Chinese officials in July and August. The ministry’s director-general for citizen protection overseas, Judha Nugraha, did not respond to a request for comment. Neither Dalian Ocean Fishing nor the Chinese Embassy in Jakarta answered phone calls on Nov. 16.

A Chinese website that compiles court rulings shows DOF has been named in more than a dozen lawsuits filed this year against it and its sister companies, alleging a failure to repay loans. Courts in several of these cases have ordered assets belonging to DOF to be frozen. It’s not immediately clear whether the vessels from which the Indonesian crew members were repatriated are included among these frozen assets.

“Besides facilitating the repatriation, the Indonesian government must ensure and guarantee that the crews’ rights such as salary and bonuses are paid by Dalian Ocean Fishing,” said Mohamad Abdi Suhufan, the national coordinator of the NGO Destructive Fishing Watch (DFW).

The harsh working conditions faced by Indonesian sailors on board the DOF fleet came to light in May this year, when a group of them were repatriated from South Korea, where DOF vessel Long Xing 629 had docked. Four Indonesians had died after working on board the boat; one of the bodies was dumped into the sea in December 2019. In August, another Indonesian sailor died on board the Long Xing 629; his body was one of two sent back in early November. Judha said both died from “sickness,” though he did not elaborate.

The survivors of the Long Xing 629 sent home in May told the South Korean human rights group Advocates for Public Interest Law (APIL) that they had suffered from dangerous and unhealthy working conditions. They said they captain had confiscated their passports, made them work an average of 18 hours a day, and directed them to use specialized gear to catch and fin a large number of sharks, including threatened species protected under the CITES trade convention.

Indonesian authorities have filed human trafficking charges with three local employment agencies that recruited the men to work on the Long Xing 629. The Foreign Ministry says it is also pursuing a mutual legal assistance treaty with its Chinese counterpart to expand the investigation beyond Indonesia.

A million hectares ablaze as forest fires sweep through Bolivia