Far out in a featureless sea, the light of the moon is a beacon for migrating eels. They’re aiming for coastal estuaries, gateways to freshwater rivers where they will live for decades. When visibility becomes poor, eels can read an estuary’s unique magnetic map to navigate upstream.

New research led by Alessandro Cresci, a Ph.D. candidate in biological oceanography at the University of Miami in Florida, is highlighting two key stages in the migration of European eels (Anguilla anguilla), an IUCN Critically Endangered species.

“There’s a lot of work on how eels respond to patchy stimuli like light,” Cresci said of past research. “But we wanted to look into more stable navigational cues.”

European eels begin as leaf-shaped larvae riding the Gulf Stream across the Atlantic Ocean, from the Sargasso Sea near Bermuda to the continental shelf off western Europe. Over the two-year crossing, they metamorphose into transparent glass eels just 7 centimeters (3 inches) long. Hundreds of millions arrive each year at coastlines from Scandinavia to Morocco.

Navigating up estuaries toward inland rivers, glass eels turn a camouflaging brown. They live for 5 to 30 years in the same river, growing from immature yellow adults into silver eels up to 1 meter (3 feet) long. Finally, these mature eels return to the Sargasso Sea to spawn and die. Their lifelong migratory loop tops 10,000 kilometers (6,200 miles).

Passing from open ocean into murky rivers, eels must rely on all of their senses to navigate. Scientists have shown that eels use smell, temperature and tides to find rivers close to shore, and many are thought to respond to the lunar cycle.

However, while magnetic and lunar navigation has been studied heavily in other species like salmon, according to Cresci, “the marine phase of the eel migration is really a black box.”

To study their navigation in the open ocean, Cresci and his team collected 203 glass eels from the Austevoll Archipelago in Norway. Drifting over the continental shelf, they deployed a transparent chamber that mimicked natural conditions for the eel inside while compasses logged its preferred swimming direction. Tests were run in daylight during the four phases of the moon: new, first quarter, full and third quarter.

Most eels swam in a purposeful, non-random direction. The trend was strongest during the new moon, when 96 percent of all eels swam quickly towards the moon’s position above the horizon.

This caused the eels to generally swim southward, the average direction of the moon’s path across the sky from east to west. Glass eels are pulled northward by the powerful Gulf Stream, and while they can’t overcome this current, angling in a southern direction makes it more likely they will land somewhere favorable.

However, the new moon rises with the sun and casts very little light. Cresci and his colleagues think eels follow the moon’s electrical signal, not its faint glow.

Positioned between Earth and the sun, a new moon is exposed to solar winds that blow negative electrical charges to Earth’s surface. In effect, said Cresci, this forms a “shadow” that the eels’ sensitive receptors can detect.

It’s likely, he added, that the light of the full moon helps orient the eels as well. They are preparing to conduct the same tests at night, when the full moon rises above the horizon.

But once eels reach the muddy bends of an estuary, the moon isn’t useful. Estuaries flow with tidal rhythms, and the motion of sea water across Earth’s magnetic field creates small electric currents that are also detectable by fish.

Because European eels settle in one river, Cresci thought young eels might imprint that river’s specific electromagnetic signature to form a lifelong, rudimentary map to navigate back to the Sargasso Sea as adults.

Cresci and his team collected another 222 eels from estuaries in Norway flowing along different compass axes. In a remote facility designed to study magnetic orientation in aquatic organisms, they manipulated electric coils to randomize the magnetic field and recorded how eels oriented in the invisible magnetic current.

About 70 percent of eels oriented to the tidal conditions taking place in their home estuary at that moment. If the tide was ebbing, eels oriented one way; if the tide was flowing, they shifted their bearing by 180 degrees, a response to the change in the electric field caused by the reversal of flowing water. Glass eels remembered the tidal signature of their estuary and responded to it even when removed.

Together, these studies paint eels as multifaceted navigators.

“I think they can sense a lot, but they use specific cues at each step depending on the environment,” Cresci said.

The work is “good research by good scientists,” said Paul Coulson, Director of Operations for the UK-based Institute of Fisheries Management, who was not involved in either study.

Understanding eel navigation is essential to their conservation, Coulson said. Overfishing has reduced European eels to less than 10 percent of their historical population. The European Union ended international commercial trading in 2010, but the wildlife trade monitoring group TRAFFIC recently reported a surge in glass eel smuggling. Coulson calls it “by volume, the largest wildlife crime of animals on the planet.”

The EU is also implementing a restocking program. Countries like France with large glass eel fisheries must retain 60 percent of their catch to help repopulate the eels’ historic range. Cresci’s results suggest that moving eels from their home rivers could disorient them.

“We relocate millions of animals each year, so the imprinting results are quite important,” Coulson said. “Keeping them on the same migratory track is something we should consider.”

As each link creates a fuller picture of how eels navigate a shifting environment, Cresci says he feels confident in their resilience: “Nature can be surprising, and this ancient and mysterious creature of a few inches can accomplish incredible things.”

Amanda Heidt (@Scatter_Cushion) is a graduate student in the Science Communication Program at the University of California, Santa Cruz. Other news stories by UCSC students can be found at https://news.mongabay.com/list/ucsc/. 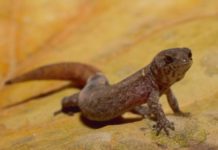 How do we save charisma-challenged species? Start with a story 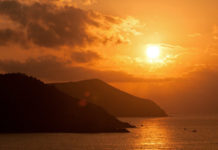