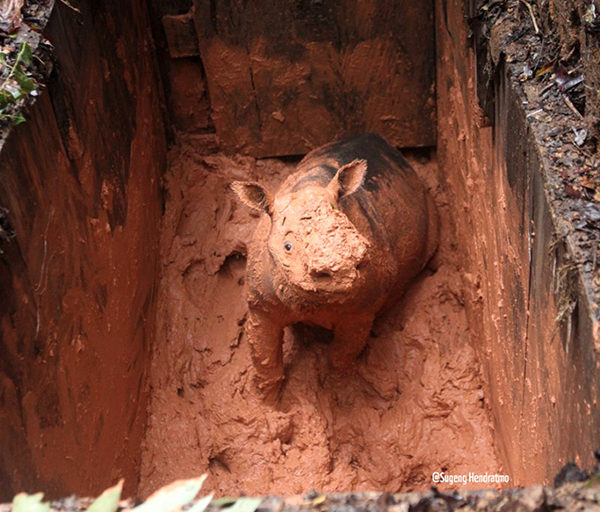 JAKARTA — Indonesian officials have identified a wild Sumatran rhino that they plan to catch for a captive-breeding program in Kalimantan, the Indonesian portion of the island of Borneo.

“The rhino’s name is Pari,” Indra Exploitasia, director of conservation at Indonesia’s environment ministry, said in a webinar on July 3. She didn’t say whether the rhino was a male or female, and ministry officials didn’t respond to multiple requests by Mongabay for further information on the rhino.

Conservation officials already have a female Sumatran rhino, named Pahu, at the Kelian Lestari captive-breeding center in East Kalimantan province. Officials announced recently they were putting on hold their search for a male of the species to join her, citing the coronavirus pandemic. The program was already reeling from the government’s unilateral dumping of WWF as its conservation partner, a consequence of which was the scrapping of a plan to capture a rhino last year.

The Sumatran rhino (Dicerorhinus sumatrensis) is a critically endangered species, with fewer than 80 believed to be remaining in the wild. Of those, fewer than 16 are believed to inhabit three known sites in Kalimantan.

According to Indra, Pari is one of three wild Sumatran rhinos that conservation experts and officials have identified and been monitoring in East Kalimantan. She said there were only about 1,000 hectares (2,500 acres) of rhino habitat left in the province, carved up by mining and logging concessions.

“We have coordinated with the concession holders to protect the areas that are rhino habitats,” Indra said.

“Right now, we are still doing analysis on rhino Pari’s behavior to help us easily carry out the capture,” she added.

The Indonesian government already runs a captive-breeding center at Way Kambas National Park on the island of Sumatra. It has seven rhinos there, two of which were conceived and born there. In 2016, it launched an effort to capture wild rhinos in East Kalimantan in a bid to broaden the gene pool of the animals in the captive-breeding program. (The rhino populations in Sumatra, D. s. sumatrensis, and Borneo, D. s. harrissoni, are subspecies that have been genetically separated for hundreds of thousands of years.)

Later in 2016, conservationists and officials captured their first Sumatran rhino in Kalimantan and named her Najaq. But she died within weeks of her capture due to an infected wound officials say was likely caused by a poacher’s snare. In 2018, they successfully captured Pahu and moved her to the Kelian Lestari sanctuary.

The 4,561-hectare (11,270-acre) Kelian forest, where Najaq was discovered, is a reclaimed gold-mining concession previously managed by a subsidiary of mining giant Rio Tinto. Industrial mining and oil palm operations in the region have taken their toll on the indigenous wildlife, which also include orangutans and sun bears, prompting conservationists and the government to launch a project to capture the region’s rhinos (considered “doomed” populations because of their low prospects for propagating in the wild) and move them to a safer area.

“We are trying to make the Kelian facility become a sanctuary that can give birth to Sumatran rhinos in Kalimantan, just like the one in Way Kambas [in Sumatra],” Indra said.

Indra previously told Mongabay that there was a plan for in vitro fertilization, using Pahu’s eggs and the sperm from one of the captive males at the Way Kambas facility.

That option appears to still be on the table, with Indra saying on the recent call that it was important to try and cross-breed the two subspecies to diversify the gene pool.

“Hopefully with the addition of fresh blood from the wild, we can attempt to carry out an assisted reproductive technology program to produce rhinos with a rich genetic diversity. So there won’t be inbreeding among Sumatran rhinos in Sumatra and Kalimantan,” she said.

The species has been driven to the edge of extinction by habitat loss, with Sumatra and Borneo losing vast swaths of forest to oil palm plantations and coal mines, as well as poaching. Now, with a dwindling number of rhinos scattered in fragmented pockets of forest, conservationists cite a low birth rate as the primary threat to Sumatran rhinos’ survival. Female rhinos in captivity have been found to develop reproductive problems and infertility as a result of prolonged absence from a male, and conservationists fear this could happen to Pahu.

There’s widespread consensus among conservation experts and authorities around the world that capturing wild rhinos from these “doomed” isolated populations and putting them into captive-breeding programs is the most viable option for saving the species.

Correction: Najaq, the rhino captured in Borneo in 2016, is believed to have died from complications to an injury she sustained before being captured. 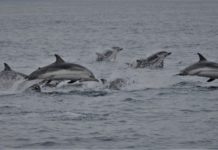 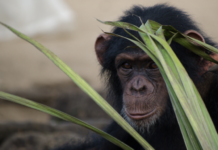 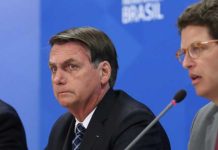