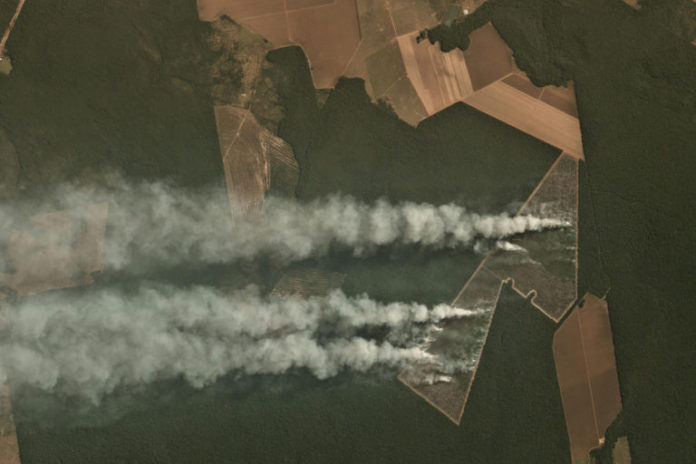 Importantly, most Amazon fires are not acts of nature. Rather, the majority of fires burn over recently deforested land, with the blazes intentionally set by land grabbers, farmers, and landowners, converting newly cleared forest into pasture and croplands — sometimes as part of a longstanding process of illegally converting public lands to private lands.

“The data from MAAP…focuses only on large deforestation events and depend on a fair amount of manual labor, but the data are therefore also highly confident as they use multiple lines of evidence to confirm both the driver (deforestation) and the emissions (aerosols) coming from the fire,” Niels Andela told Mongabay in an email; he is a lecturer in remote sensing at Cardiff University and developed the algorithm behind NASA’s Amazon Dashboard platform.

NASA’s new Amazon Dashboard, launched August 19, uses a more automated approach than MAAP, and claims some major advances in the way fires are monitored. The platform identifies the number of significant fires burning in the Amazon (instead of just hotspots), what type of fires are burning, and how many new fires started each day — all using automated data collection and computer analysis.

“The key advantage of our method is that it is fully automated and thus maps all fires across the region,” Andela said. “Also, we provide much more information than just deforestation fires. For example, our dataset allows for quick identification of all new fires burning across a given region and is intended to support land managers.… Particularly the early identification of understory fires is critical for firefighting efforts.”

“We hope this tool pushes the conversation past some of the confusion surrounding the 2019 fire season,” Doug Morton of NASA’s Goddard Space Flight Center, who helped develop the dashboard, said. “Satellites detect large numbers of fires in South America every year, but not all of these fires are of equal importance.”

“We filter the data and we eliminate the industrial areas [i.e. blast furnaces] or volcanoes,” Alberto Setzer, an INPE senior scientist involved in producing official fire data told Mongabay. “And I suspect most sites in the world don’t do this type of analysis.”

INPE has been monitoring fires for over 20 years and their system is useful for making comparisons of hotspot counts across time or within specific regions including states, municipalities, protected areas, or Indigenous territories. The hotspot data is also easy to overlay with satellite imagery, making it useful for local enforcement and management agencies or the media to pinpoint locations of interest for further investigation.

Hotspot data: It’s intuitive that light on earth can be detected from space, but how is heat detected without a thermometer on the ground? Much as the human eye can detect color variation in the visible light spectrum, satellites are outfitted with tools that can “see” temperature differences.

Fires emit most of their energy in the thermal infrared domain as “infrared light,” invisible to the naked eye but not to a satellite. One particular infrared wavelength (around 4000 nanometers) is especially associated with fires. Several different satellite instruments are used to detect this specific wavelength, allowing for the verification of the thermal signature, or the heat released, from fires on the ground.

These fires are pinpointed by looking for a contrast between a “hot pixel” or “hot spot” (coded yellow to red in an image) and the cooler surrounding pixels portrayed in other colors. The VIIRS instruments onboard the Suomi-NPP satellite (launched in 2012) and the NOAA20 satellite (launched in 2017) are the latest generation of these instruments and have an improved higher resolution of 375 meters. This more tightly focused pixel area allows for the detection of smaller or more low-intensity fires, such as those burning in the understory of a tropical forest. Higher resolution also means its easier to pinpoint a precise location.

However, “You have to be careful about making a distinction between fires and fire pixels,” says Louis Giglio. “Pixels are what you see from VIIRS,” he explains, cautioning against the equation of individual hotspots and fires. Giglio is a research professor at the University of Maryland who studies remote sensing of active fires and burned areas.

Aerosol data: MAAP uses aerosol index data to detect major fires, the idea being that a fire burning enough biomass — organic matter — to emit smoke plumes into the atmosphere is one big enough to be worthy of investigation.

Aerosols are particles suspended in the atmosphere (including smoke, dust, fog, mist, and pollution). Satellite sensors that measure aerosols detect the light scattered by these aerosols in contrast to the reflectance from the background (Earth).

The MODIS (Moderate Resolution Imaging Spectroradiometer) sensor on NASA’s satellites detects aerosols that come from fire (smoke), dust, pollution, but it does not always discriminate smoke from dust.

The TROPOMI sensor on the European Space Agency’s Sentinel-5P satellite, on the other hand, is quite sensitive to aerosol layer height as well as absorption, so it can differentiate between dust and smoke, as smoke rises higher into the atmosphere.

How does all of this information translate into action?

Although INPE, Brazil’s national space research institute, has access to all of the tools and monitoring methods mentioned here, as well as possessing its own advanced methods for detecting Amazon fires, how decisionmakers use this information depends on political will, current policies, enforcement actions and suppression capabilities.

“They [INPE] have wonderful resources, really impressive,” Kátia Fernandes, a climate scientist at the University of Arkansas said. “So, knowing where deforestation is happening, where fires are occurring, this is not a bottleneck for taking action. What does change over time is investment in law enforcement.”

A moratorium on burns was issued on July 15, 2020 by the Bolsonaro administration, making all subsequent intentionally set Amazon fires illegal. Since that time, INPE’s data has been used to prosecute and fine some offenders. But the funding and organizational capacity of fire control and enforcement agencies such as IBAMA, Brazil’s environmental agency, have been significantly curtailed by the current government. And reportedly, efforts by the Army to control this year’s fires have been insufficient.

State of the art satellite monitoring and moratoriums do little good when regulatory agencies lose the support and funding they require to conduct boots-on-the-ground fire control, or the ability to prosecute those who set illegal fires. IBAMA, for example, given the job of patrolling and fighting fires across the entire Amazon basin, is operating this year with just five helicopters.

“No matter how much technology we throw out at this [fire crisis], or how many better methods or algorithms or AI or whatever,” Giglio said, “nothing’s going to change until you address the problems on the ground.”

Banner image: Planet images showing fire on recently deforested near Itaúba in the State of Mato Grosso, Brazil on June 29, 2020.

Liz Kimbrough is a staff writer for Mongabay. Find her on Twitter: @lizkimbrough_ 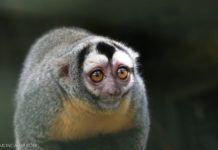 We are failing to save the planet’s species, finds UN report 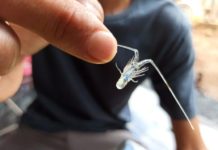 The Facts’ is surprisingly radical