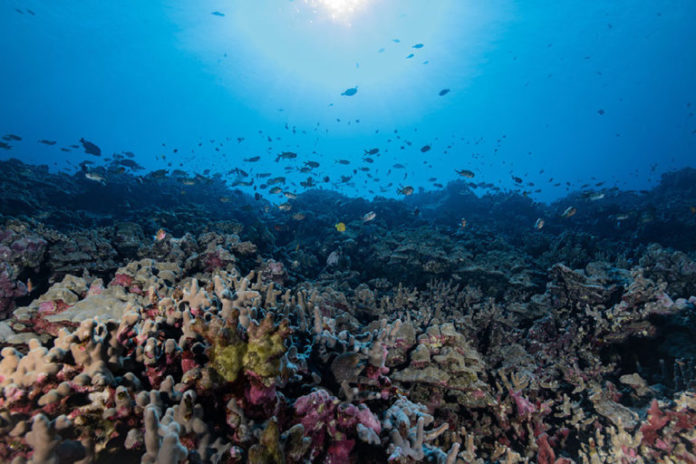 A healthy coral reef system is like a well-managed city. Each resident fish has a job in maintaining the reef: some nibble away at seaweed threatening to smother the coral, while others crunch through bits of coral, making space for new polyps. In turn, the reef provides food and a refuge where fish can sleep, reproduce, and hide from predators. These relationships are symbiotic: the fish help the reef, and the reef helps the fish.

But when fish disappear from a coral reef due to fishing or pollution, the system is thrown out of balance, and a reef may deteriorate to the point of collapse, especially when coral bleaching and other climate change-induced factors are thrown into the mix. This is exactly what’s happening to the coral reefs in West Hawai‘i, the western shoreline of Hawai‘i’s Big Island known as the Kona coast, according to a new study.

Published last month in Ecological Applications, the study investigates how human activities, such as fishing, aquarium collection and pollution, affect so-called resource fishes that live in the shallow waters along the reef. The study defines resource fish as species that are “important to local subsistence or cultural sectors,” such as by providing food or income. Overall, it documented a 45% decrease in resource fish biomass across West Hawai‘i’s reefs between 2008 and 2018.

“A 45% decline in 10 years is very alarming,” said Greg Asner, co-author of the study and director of the Center for Global Discovery and Conservation Science at Arizona State University (ASU), a program with which Mongabay is developing a partnership.

For the study, Asner and his colleagues analyzed fish survey data collected by the Hawai’i Division of Aquatic Resources (DAR), which manages the state’s fisheries and reef systems, between 2008 and 2018 at 300 sites across 180 kilometers (112 miles) of coastline. They also used data obtained from ASU’s Global Airborne Observatory, a laboratory aboard an airplane that captures 3D images of coral reefs beneath the water, and calculated the amount of nitrogen pollution from onsite sewage disposal systems and golf courses that reached the reefs.

For the most part, West Hawai‘i’s coastal waters are organized into different types of marine protected areas (MPA), each of which follows distinct regulations. Some just ban lay nets, vertical nets that hang across the water column and indiscriminately capture any fish that swim into them. Others ban both lay nets and collection of live fish for the aquarium trade, and several ban lay nets, aquarium collection and spearfishing. There are only a few MPAs that completely prohibit the taking of fish. By analyzing the fish survey data across these different types of MPAs, the researchers were able to distinguish how various human activities influenced fish biomass on the reefs, Asner said.

According to the study, nitrogen-based pollution from onsite sewage disposal systems (OSDS) such as cesspools, septic tanks and injection wells had the biggest negative impact on fish biomass, and to a lesser extent, nutrient runoff from golf courses. But spearfishing, aquarium collection and the use of lay nets followed closely behind, Asner said. MPAs that banned all three activities had the highest overall fish biomass.

The research team was also able to determine how certain equipment bans may have influenced fish populations. For instance, in 2013, the DAR banned scuba diving-assisted spearfishing. As a result, populations of the “scraper” species that spearfishers typically target (fish that eat algae and bits of coral reef), such as parrotfish, appeared to recover slightly.

The decline in fish biomass is concerning as it can lead to a decline in reef health, according to Asner.

“You’ve got to close your eyes and picture this: when you have a healthy reef, you have lots of coral … and it makes these towers of all shapes and sizes,” Asner said. “If you have a decline in fish, and the coral dies, then waves and nature will just erode it like soil back to more of a flat surface. Then there’s a negative feedback loop when the fish can’t … use the coral as its habitat.”

Brian Nielson, the DAR administrator, told Mongabay that the new study reinforces the department’s existing concerns about the health of Hawai‘i’s coral reefs. “I guess it wasn’t a big surprise, but it is great to be able to look at a big picture view of the reefs,” he said.

The findings, Nielson said, could help inform the development of new policies, such as increasing protections for herbivorous reef fish, strengthening state rules and regulations around the reporting of commercial catches, and improving enforcement, all the while collaborating with local communities to co-manage fisheries. Nielson said that managing pollution issues is beyond the division’s capacity and jurisdiction, but it currently has partnerships with groups that are addressing sewage issues and working to restore degraded watersheds.

Nielson said another path toward protecting Hawai‘i’s coral reef systems is the state’s 30 by 30 Oceans Target, which aims to protect 30% of Hawai‘i’s nearshore waters by 2030.

“Six percent of our waters are designated as some form of marine managed areas, so we’re looking at taking that up to 30%,” Nielson said. “This paper is really helpful in scientifically validating the success of existing marine managed areas, so that kind of gives us some scientific backing when we go out to the public to propose expanding these areas, and putting more marine protection on other islands and other parts of the state.”