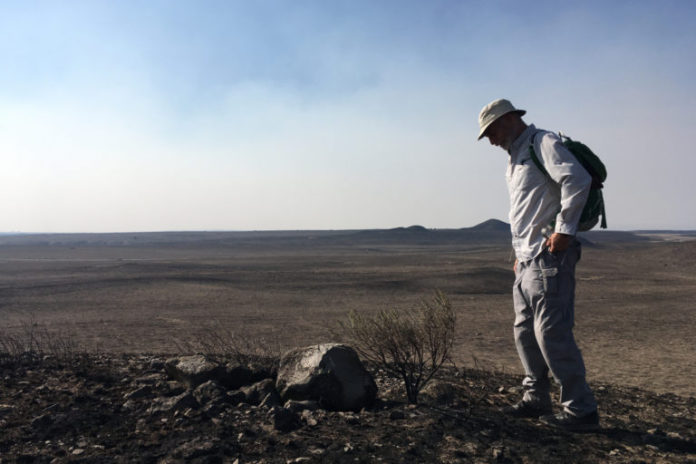 BRIDGEPORT, Washington — There are fewer than 1,000 sage grouse left in Washington state, and Michael Schroeder has been studying them for more than 30 years. Schroeder is a biologist with the state’s fish and wildlife agency. He also lives in Bridgeport, a community which saw extensive destruction from the Cold Springs and Pearl Hill Fires.

Schroeder and his wife lost power and water at their Bridgeport home when the fires swept through the area over Labor Day Weekend, razing a combined area of more than 167,000 hectares (413,000 acres). Some of their neighbors lost everything.

He was worried about the sage grouse (Centrocercus urophasianus) that live in the open stretches of sagebrush near his community.

“I’ve been driving around for the last 24 hours checking out some of the damage and it’s just, it’s just devastating,” Schroeder says in a recent interview as we drive through miles of scorched sagebrush, melted guardrails and smoking power poles. “This has been a fire for the century. Washington state, from a personal perspective, and from a grouse perspective, has been devastated.”

More than 600,000 acres of forest and sagebrush rangeland have burned in Washington State this fire season, leveling at least one town and destroying ranches, farms and homes across the central and eastern part of the state, as well as knocking out power to thousands of people. There are several fires still burning.

We drive toward the town of Mansfield, which came close to obliteration as flames encircled the small farming community. The winds were blowing so hard that flames raced across fallow fields, where there was otherwise very little fuel to propel the fire.

“You have to have an incredible wind to be able to burn ground that doesn’t have anything growing on it,” he says.

He turns onto a dirt road that leads toward the largest sage grouse lek, or mating site, in Douglas county. It’s known as the Mary Jane Hill Lek, and in previous years upward of 20 males would be counted here, puffing up the large air sacs on their chests and fighting one another to establish dominance and attract females.

Schroeder has been visiting this lek to do population counts for decades, and in that time the birds have been declining — both here in Washington and across their range. Schroeder and other scientists recently published a report that brings together data from nine Western states that monitor sage grouse populations. It concluded that populations have declined by an average of 44% in the past five years.

There are a variety of factors that contribute to the loss of sage grouse in the West. Oil and gas extraction, wildfires, development projects, habitat loss, invasive species, and overgrazing are all part of the picture. Wildfires were previously not a significant factor in sage grouse declines in Washington state, until now.

In other parts of the sage grouse’s range, such as Nevada and Utah, rangeland wildfire has destroyed numerous leks. The Martin Fire of 2018, which was then the largest in Nevada State history, burned more than 400,000 acres and destroyed 35 known sage grouse leks.

“It’s hard to wrap your head around a fire that’s so long that you can drive through all day long and be in the black, burnt landscape,” said Caleb McAdoo, a biologist with the Nevada Department of Wildlife and a lifelong resident of the state. In much of the sage grouse’s range, invasive cheatgrass has taken over sagebrush country after fire. “It’s not a sea of sage brush anymore. We are losing it. It is going away and it is vastly altered. It’s really depressing.”

Back in Washington, Michael Schroeder is having a similar experience. He walks up Mary Jane Hill to look down on an area where, just a few months ago, he was counting sage grouse. Now, it’s just scorched earth for miles in every direction. He says he worries that more than half of the remaining population of sage grouse in Washington state — some 500 birds — may have been lost in this fire.

“This was the largest lek in the county. And it’s right in the middle of oblivion.”

Schroeder says he worries that even if some grouse survived the flames, they will have nowhere to go to seek refuge until their habitat rebounds. This pocket of native sagebrush was one of the last undisturbed grouse areas in this part of the state. It’s surrounded by fields and towns.

Schroeder stands on the hill, surrounded by blackened earth, and gestures in every compass direction. “If it was just this, but it isn’t just this. It’s like you go over to that hill and it looks the same over there. It looks the same.” His shoulders slump and his voice breaks and trails off. “There’s no way.”

Schroeder takes some solace by looking back on the geological time frame. Ten to fifteen thousand years ago, this area was covered in glaciers. The sage grouse established themselves after the ice sheets receded. “And they’ve been here ever since. And you look at it now and you think, well, this is only a fire.” It may be a long road to recovery — if that’s even possible, for these birds in this part of the world — but Schroeder says he isn’t ready to quit. “Well, that’s why I’m not going to retire, because I can’t give up on a low note.”

Michael Schroeder and his decades of dedication to the sage grouse are featured in a new eight-part podcast series called “Grouse,” hosted by Ashley Ahearn. The series explores the story of sage grouse across the U.S. West, from their cultural significance to Native American tribes in the region, to the modern-day threats the birds face. It was produced in partnership with BirdNote and distributed by Boise State Public Radio. Click here for more information.