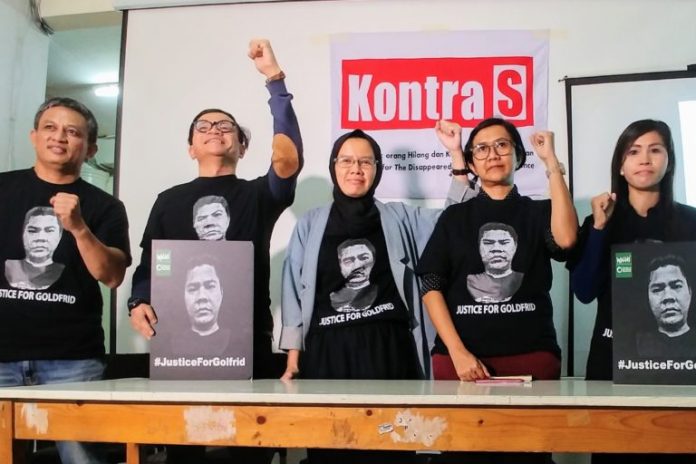 Four months on, Felicia is still waiting for her father to come home.

“If there’s a sound of motorcycle [passing outside], she’ll always call ‘dad,’” says Golfrid’s wife, Resmi Barimbing. “There are still many photos of him at home. She thinks her father is out of town because that’s what he often did [when he was alive].”

Golfrid was a member of the legal advocacy team for the North Sumatra chapter of the Indonesian Forum for the Environment (Walhi), the country’s biggest green NGO. He died on Oct. 6 in a hospital in Medan, the North Sumatra provincial capital, three days after being found unconscious near his motorcycle on a traffic overpass in the city.

Police launched an investigation, and on Oct. 11 announced their findings. They said Golfrid had been drinking and died in a motorcycle crash. They ruled out the involvement of any other party in his death. With that, the police ended their investigation, despite mounting calls from human rights activists for a thorough and transparent investigation into the suspicious circumstances surrounding Golfrid’s death.

“His death is very strange and the legal treatment is also very weird, starting from [the police’s insistence that] it was a single-vehicle traffic accident and the effort to discredit Golfrid by saying he consumed large amounts of alcohol [prior to his death],” says Usman Hamid, executive director of Amnesty International Indonesia.

With questions still swirling over Golfrid’s death, Resmi and representatives of Walhi North Sumatra traveled to Jakarta on Feb. 9 to make their case to government officials for a full investigation. While in the capital, they met with officials from the National Human Rights Commission (Komnas HAM), the Indonesian Ombudsman, and the office of the president’s chief of staff (KSP).

Resmi says she’s disappointed at the provincial authorities’ lack of progress in resolving the case.

“Until now there has been no clarity,” she says. “I came to Jakarta, all the way from Medan, to ask the state to investigate thoroughly the death of my husband.”

The evidence police cited for the conclusion they reached included injuries that they said were consistent with a high-speed impact against the curb. They also said a liquid sample taken from Golfrid’s stomach three days after his death revealed traces of alcohol. Police said one of the nurses who first treated him when he was brought to hospital reported that his breath smelled of alcohol.

According to police, two of Golfrid’s friends also said he had been drinking beer at a roadside kiosk on the evening of Oct. 2 before leaving on his motorbike.

But the family and others have questioned that version of events. Walhi says Golfrid’s family denied he was a drinker. The owner of the kiosk where he was last seen with his friends said they hadn’t drunk any alcohol that night, only coffee and tea. Walhi also said the nurse quoted by police denied smelling any alcohol on his person.

Roy Lumbangaol, Golfrid’s manager and the head of advocacy for Walhi North Sumatra, said the police report was a scheme to paint Golfrid as a drunk who had crashed his bike. The organization maintains Golfrid was killed elsewhere and his body and bike dumped on the overpass to conceal the truth. He also pointed to hospital tests showing extensive skull fractures that couldn’t have occurred from a motorbike crash.

Suspicion is rife that Golfrid was murdered in connection with his work. He had received multiple death threats over his activism, which included campaigns against oil palm plantations and sand mines. The threats ramped up after he worked on a lawsuit against the North Sumatra government over the alleged forgery of a researcher’s signature in an environmental impact assessment for a proposed hydropower project.

Activists say the planned dam would threaten the only known habitat of the Tapanuli orangutan (Pongo tapanuliensis), a critically endangered species.

Just before his death, Golfrid had lodged a complaint with the National Police in Jakarta against the North Sumatra Police’s decision to drop the investigation into the alleged forgery.

The dam’s developer, PT North Sumatra Hydro Energy (NSHE), has denied any involvement in the death threats against Golfrid.

“We’re actually supporting the police to shine a light on [Golfrid’s] death so that the dam project won’t be tied to the incident,” says PT NSHE spokesman Firman Taufick.

Walhi’s national executive director, Nur Hidayati, says critics of the dam have come under immense pressure in an attempt to silence them. This has taken the form of defamation charges, visits from security officials, abrupt termination from conservation jobs, and warnings to foreign researchers that they risk losing the right to work in Indonesia.

“The dam project proponents are very nasty,” Nur says, citing the case of the university researcher whose signature was allegedly forged for the environmental impact assessment (which the developers submitted to local authorities to obtain one of the required permits for the project). “The researcher in question was later reported to the police for [allegedly] spreading false information,” Nur says.

This record of intimidation by the project’s proponents makes it all the more likely that Golfrid’s death was also linked to the project, according to Nur.

“They’re truly desperate to carry out this project by putting pressures on academics, NGOs and environmental activists, who have all been summoned by the police,” she says. “This is what differentiates [the dam project] from other cases that Golfrid handled.”

The threats became so severe that at one point Golfrid pleaded with his wife to take their daughter and move to his parents’ home on the island of Batam, a 90-minute flight away.

“Someone phoned my husband and said that Medan is no longer safe for us,” Resmi says. “So my husband said ‘let’s move from Medan.’ We planned to move to my parents-in-law’s house in Batam last September, [but] I postponed it because I was feeling at home in Medan.”

Resmi says Golfrid had also asked her to be vigilant at all times.

“Don’t go anywhere without me,” she says he told her. “In Medan we are no longer safe. Many people are looking for our house.”

The police haven’t looked into any of those threats, says Lumbangaol, the Walhi North Sumatra official.

“To further investigate [the death], the police should have questioned those who worked together with Golfrid on advocacy,” he says. “The police know that before he passed away Golfrid received a lot of threats.”

Resmi says she offered to assist the police in the investigation, but that officers didn’t ask for her statement on the threats.

“Never,” she says. “Neither I nor [his] family were asked for information [by the police].”

When the family sought the official documents and information relating to the case, including a copy of the autopsy, the police denied them, says Andi Muhammad Rezaldy, a legal and human rights advocate with the Commission for Missing Persons and Victims of Violence (Kontras).

But the NGO managed to get some of the documents, including the autopsy and radiology reports, through unofficial means. The radiology report, from Adam Malik General Hospital in Medan, where Golfrid was first treated, showed injuries to his head, including fractures in three places.

“What we regret is that the police always emphasized the alcohol level, but never conveyed the details of the injuries on his body to the public,” Andi says. “Why would they cherry-pick which facts to reveal? That’s raises questions for us. What’s going on with the North Sumatra Police?”

The police also didn’t disclose details of the traffic accident analysis that formed the basis for their conclusion about how Golfrid had died, Andi says. That’s why the family and colleagues have called on authorities in Jakarta to step in and take over the investigation from the provincial police, as well as look into the alleged death threats.

“We ask the police and the state to really look at the political and economic dimensions of this case, not to see this as a simple murder case, much less simplify it by saying that it’s a regular traffic accident,” Walhi’s Nur says.

Resmi says she won’t stop until she finds out the truth about what happened to her husband four months ago.

“We must get to the bottom of the case,” she says.

Banner image: The widow and colleagues of Golfrid Siregar, an outspoken Indonesian activist who passed away under suspicious circumstances in Oct 2019, during a press conference in Jakarta in Feb 2020. Image by Hans Nicholas Jong/Mongabay.