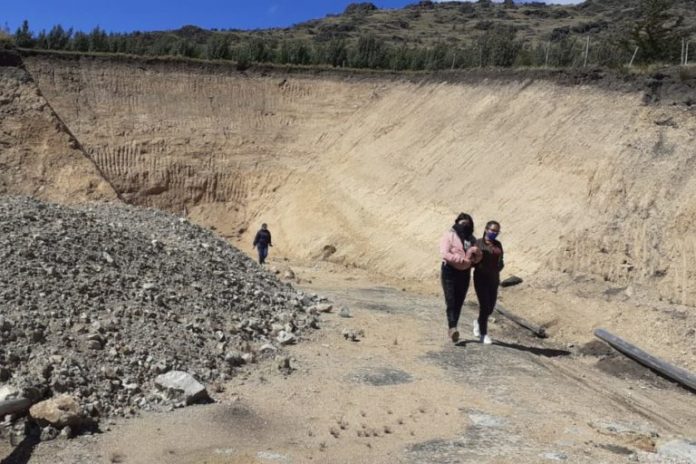 This article is a collaboration between Mongabay Latam and the digital news site GK of Ecuador.

In addition to their decision to allow the referendum, the court announced that if the voters decide to prohibit mining, that decision will apply in the future. The nine-justice panel also ruled that the text of the referendum should include a map by ETAPA, Ecuador’s public utilities company, showing the locations of “water recharge zones” — sources of water critical to the area’s population.

Palacios requested the popular consultation with the goal of protecting the area’s páramos, or high-elevation shrublands, as well as five rivers: the Tomebamba, Yanuncay, Machángara, Tarqui and Norcay. Four of these rivers cross through Cuenca and supply water to the city. In a statement to the media outside the court building, Palacios said his request included all of the necessary arguments for the Constitutional Court to accept it so that residents of Cuenca could demonstrate, through voting, that they support protecting the city’s water sources.

The origin of the request

The idea for a referendum began with environmental activists from the People’s Council for Cuenca’s Water, an organization that aims to defend the rights of nature in Cuenca. They brought their idea to the Cuenca cantonal council. During an online meeting on Sept. 1, the council’s members approved — with 15 votes in favor and one abstention — the proposal to move forward with requesting the popular consultation.

The popular consultation will include five questions, corresponding to each of the five rivers in the area. Voters will be asked to answer “yes” or “no” to the following question: “Do you agree with the prohibition of large-scale metal mining in the _____ River water recharge zone, following the technical delimitation developed by the municipal company ETAPA?”

Claudia Segovia, a biology professor at the Armed Forces University (ESPE) near Quito, said páramos are fragile ecosystems because they contain endemic species.

“The páramos act sort of like islands between the mountains that are shelters for endemic plants and animals; that makes them very important,” Segovia said. “The páramos produce the water that goes toward Cuenca. That must be made clear.”

Segovia said that the plants in Ecuador’s páramos have special adaptations that enable them to capture water. She said it would be disastrous to allow mining in the area because of the contamination it would cause. “It would destroy these ecosystems that are so sensitive,” Segovia said.

David Fajardo, a representative of the People’s Council for Cuenca’s Water, said that when the organization was planning its proposal for the referendum, initially it only included questions for the Yanuncay and Tarqui rivers. However, during an analysis by the council’s environmental commission, it decided to include all five rivers as a way to protect a larger area of land, Fajardo said.

Fajardo said the mining activities referred to in the popular consultation are two large-scale projects, Loma Larga and Río Blanco. The Loma Larga mining project for gold, silver and copper is located in the cantons of Cuenca, San Fernando and Girón. The project includes the concessions of Cerro Casco, Río Falso and Cristal and is currently in the exploration phase. The production phase of the mining project is expected to begin in early 2021.

The Río Blanco mining project is already supposed to be under exploitation. However, the production phase, which was slated to begin in 2019, has not yet begun because members of the Confederation of Peoples of Kichwa Nationality (ECUARUNARI) requested a protective action in June 2018. Judges ruled that the Río Blanco mining project would be located in an area that is a source of water, according to a mining report by the Central Bank of Ecuador.

There are 765 mining concessions in Azuay province, where Cuenca is located. Some of these are already registered with the Mining Regulation and Control Agency, but others are still pending. Ivonne Ramos, a member of the organization Ecological Action, said she believes the next step is to campaign in Cuenca in favor of banning mining activity. Ramos said there will also be citizens opposed to banning mining “with the argument that [mining] will generate jobs for the canton, the province, and at the national level.”

The Chamber of Mines of Ecuador (CME) told Mongabay Latam that “responsible mining activity should not be questioned, nor should it be subject to popular consultations.” Representatives from CME said mining is a strategic industry in Ecuador, conducted with good environmental and social practices. They said “any land where they prohibit formal mining is easy prey for illegal miners and all the criminal activities they bring.”

After submitting the popular consultation request in early September, Mayor Palacios said that as soon as the Constitutional Court approved the request, it would be passed along to the National Electoral Council so that it could be included in the February 2021 election ballot. This election will also determine Ecuador’s next president, vice president, national and provincial assembly members, and Andean parliament members.

The Constitutional Court had 20 days to review the request and provide a statement on the constitutionality of the popular consultation project. Fajardo, of the People’s Council for Cuenca’s Water, said, “The mining sector says that its legal certainty would be violated.” Legal certainty is the principle that says laws should be clear in guiding how people and, in this case, companies conduct themselves. But Fajardo said mining rights are not fundamental rights.

The area surrounding Cuenca is no stranger to popular consultations. On March 24, 2019, the nearby canton of Girón held a referendum for citizens to decide whether to prohibit mining activities in the páramos and sources of water in the Quimsacocha hydrological system. More than 80% of voters in Girón voted “no” to mining in this popular consultation, which came after eight years of opposition from community members and those who work with community water systems.

The Ecuadoran government considered the outcome of this vote a blow to the industry because it impacted part of a mining concession in Girón owned by a Canadian company called INV Metals, Inc.

Yaku Pérez Guartambel, the head of Azuay province and a 2021 presidential candidate, has sent a popular consultation request to the Constitutional Court three times to prohibit mining in the province. All three requests were denied.

In July 2019, Pérez submitted his first request to stop industrial mining. Two months later, in September, the Constitutional Court denied his request. It said the request was posed in a general way, referring to a “high number of mining projects such as those being developed in Azuay and to several ecological zones in said province.” Additionally, the court said the question did not guarantee the liberty of the voters and was not written in a way that allowed them to vote “yes” or “no.” Rather, the question required a more detailed answer.

On Jan. 7, 2020, Pérez presented his second request to the court. This time, he raised two questions. The first was related to the prohibition of small-, medium- and large-scale traditional metal mining, and the second dealt with the cancellation of metal mining concessions that were granted prior to the popular consultation request.

A month later, the Constitutional Court denied and archived Pérez’s request because the question he posed about the cancellation of the mining concessions affected “the constitutional right to legal certainty.”

On Aug. 3, 2020, Pérez returned to the Constitutional Court to deliver a third request, this time with a single question on the prohibition of small-, medium- and large-scale traditional metal mining in the protected Yanuncay-Irquis forest and vegetation area of the Tarqui River micro-basin. Once again, the court denied the request, saying Pérez’s question would not allow voters to decide freely and responsibly.

Environmental lawyer Esteban Falconí said he believes Pérez’s three proposals were rejected because of extrajudicial arguments. “They take the argument from anywhere to avoid approving the consultation,” Falconí said. “This happens a lot.”

Pérez, who said he is not a newcomer to the field of law, also said the questions were not laid out poorly. He said he believes the judges in the court held different criteria. He called it “a shame because the Constitutional Court is composed of competent people, but their wills bend under pressure.”

Even so, some experts were critical of Pérez’s claims. Juan Francisco Guerrero, a constitutional lawyer, published an opinion piece on the website of the Chamber of Mines of Ecuador. He indicated the popular consultation would attempt to modify the Constitution because, according to Article 407, mining activity is only prohibited in protected areas, urban centers and intangible zones set aside because of their biological or cultural importance. Therefore, to prohibit mining in other areas, the Constitution would need to be changed.

The extent of constitutional prohibitions on mining is quite controversial and subject to differing interpretations. Johel Escudero, a professor of constitutional law at the Institute of Advanced National Studies (IAEN) in Quito, said the popular consultation requested in Cuenca would not involve a change to the Constitution because this is a general rule and “it may bring in new agreements made by society and the country.”

Holding on to hope

Fajardo, of the People’s Council for Cuenca’s Water, said that in this new request for a popular consultation, the council analyzed the old requests made by Pérez (of Azuay) so that the court would not deny the request this time. Additionally, Mayor Palacios said the questions were written in a detailed manner, “taking care of the dots and commas.”

Less than three years ago, in February 2018, President Lenín Moreno called for a popular consultation at the national level. Ecuadorans were asked their opinions on amending the Constitution to prohibit metal mining (in all of its phases) “in protected areas, intangible zones, and urban centers.” The majority of voters said “yes” — that is, they were in favor of prohibiting mining in those areas.

According to Ecuador’s Code of Democracy, the next step to conduct the referendum on mining around Cuenca is for the applicants collect signatures from at least 10% of registered voters. The signatures must be reviewed and accepted by the National Electoral Council, which will then call for the popular consultation to determine the future of mining in Cuenca.

Banner image of the Río Blanco mining project located in the Molleturo and Chauca parishes in Cuenca, Ecuador, by Elizabeth Durazno.

This story was first reported by Mongabay’s Latam team and published here on our Latam site on Sept. 21, 2020.

Building a road to recovery for subtle racism in conservation (commentary)