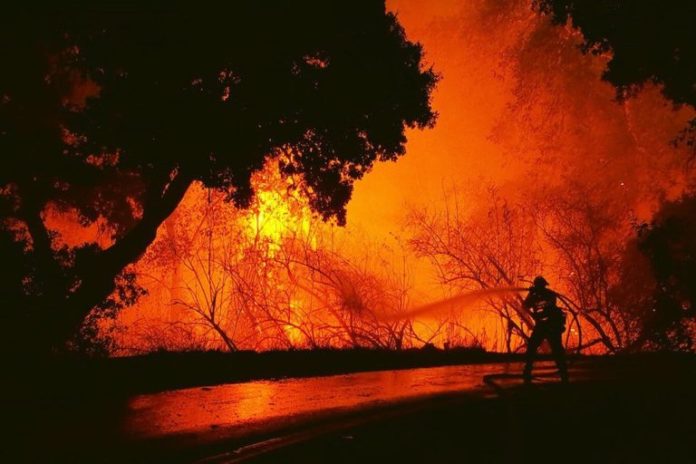 California is burning with a ferocity never seen before in the Golden State. So far this year, fires have burned through more than 1.4 million hectares (3.4 million acres) of land — about half the size of Belgium — according to the California Department of Forestry and Fire Protection. What’s more, it’s only mid-September, and the region’s normal fire season usually lasts until somewhere in November.

Along with the flames comes a rapid rise in carbon dioxide emissions, which, in turn, will accelerate climate change events that are fueling the current fires, experts say.

It’s estimated that the 2020 California wildfires have already generated more than 91 million metric tons of CO2, according to data from the Global Fire Emissions Database (GFED). That’s about 25% more than annual emissions from fossil fuels in the state, Niels Andela, an atmospheric scientist from Cardiff University in the U.K., told Mongabay.

“This year is really, really off the chart,” Andela said. “We estimate … that this is the highest year we have on our record, at least.

“In ideal conditions when those forests are able to regrow, they will eventually reabsorb those emissions again, although that may take many decades … but for some of those forests, it might be really hard to fully recover,” he added.

Nancy Harris, research manager of Global Forest Watch, said what’s particularly concerning about the California fire CO2 emissions is that it contributes to a multipart climate feedback system that will exacerbate the effects of climate change.

“There’s a time dimension to all of this,” she added. “The climate system takes a while to adjust to any change, either positive or negative, and so even if we cut off the fossil fuel pumps tomorrow, there will be some remnant climate change [effects] that will come just because of what’s happened already. But that’s not to say that we are not able to turn the ship.”

Globally, CO2 levels have already reached 414 parts per million (ppm), and signs suggest the number will continue to soar, largely due to human activities such as deforestation, fossil fuel burning, and human-caused climate change events like the California wildfires.

As California enters a new era of climate uncertainty in which cataclysmic fires could be the new “normal,” Harris says that people can minimize fire risk by choosing not to live in the wildland-urban interface (WUI), areas that are identified as fire hazard zones due to the presence of flammable vegetation.

“I think we need to be smart about where we build and rebuild our communities,” Harris said. “[C]limate change is happening, and if we want to reduce these fires, that’s one tangible way that we can help.”

Public lands and parks are our common heritage: Bruce Babbitt