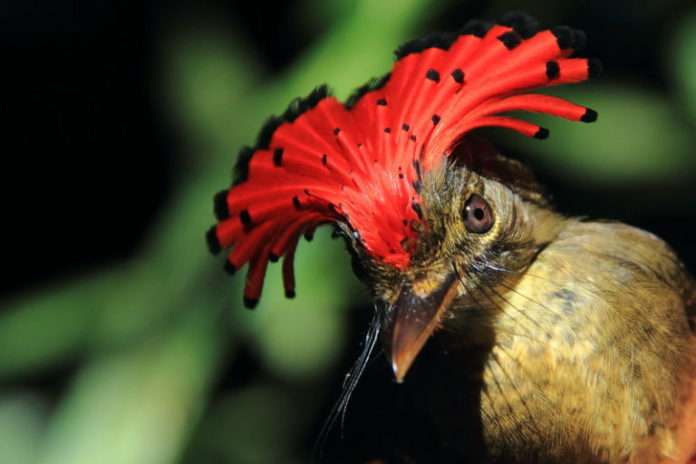 Fires do not occur naturally in the Amazon rainforest. So, for fires to burn in a standing forest there, a few things must happen, namely a dry year along with lots of ignition sources on neighboring lands. These sources — almost exclusively human caused — can arise from runaway agricultural fires (routinely used to burn off croplands and pastures to remove pests, for example), or from blazes set intentionally to clear land following deforestation, much of it illegal.

“It’s difficult to know what ‘typical’ is when it comes to fire in the Amazon,” Jos Barlow, a professor of conservation science at Lancaster University, UK, told Mongabay. Barlow, who has been studying Amazon fires for over two decades, added: “Last year… we had lots of deforestation fires…. whereas, this year, it does seem to be that the fires are burning more areas of standing forest, which is a huge concern.”

The Amazon fires that drew international attention in 2019 largely followed a pattern of recent deforestation, driven by landgrabbers, emboldened by Brazilian President Jair Bolsonaro’s pro-agribusiness rhetoric. In February, more than 1,200 scientists signed a letter, stating that, “the administration of President Jair Bolsonaro is dismantling the country’s social–environmental policies.”

In comments to the United Nations this week, Bolsonaro said that the country has, “the best environmental legislation on the planet,” and that, “the fires practically occur in the same places, on the east side of the forest, where peasants and Indians burn their fields in already deforested areas.” He provided no evidence for this claim.

Analysis by MAAP, NASA, INPE and others show a widespread pattern of fires throughout the Brazilian Amazon that includes significant illegal burning within conserved areas  — doing serious harm in the most biodiverse country in the world.

When it burns, what happens to life in the forest?

The rainforest burns slowly. A fire line could advance just 300 meters (984 feet) in 24 hours, Barlow says. Such slowly moving burns give large mobile animals plenty of time to flee. But where to? The choices are to burrow, head to water, or move into other areas. Most animals cannot simply shift into the territory of another without consequence: be that violence from a competitor, or simply a lack of resources like food and shelter. Unfortunately, the research on the impacts of such flight is limited.

“We don’t really know what happens to the larger animals that are forced to move into other territories,” Barlow said. “So, presumably, at some point, there’s a reduction in population size, because you can’t just have more animals in an area.”

Primates, for example, may get trapped in islands of unburned vegetation in the burnt forest, persisting on remaining food until they are forced to risk travel into foreign habitat. Fires in 2019 burned through the habitat of a recently discovered species, the Mura’s saddleback tamarin. But the effects on its population are unknown.

“Who can survive the flames? We know arthropods nesting in the soil usually do very well,” Lucas N. Paolucci, a professor of biology at the Universidade Federal de Viçosa, Brazil, told Mongabay in an email. “But several others, like litter-dwelling invertebrates, some birds, small mammals and snakes frequently die directly due to flames.”

“You do see the small invertebrates trying to flee the flames and obviously they don’t survive,” Barlow said. “We’ve come across forest floor tortoises and [turtles] with burns scars on their shells. So, some animals do get affected and do burn.” But how many animals may die in this year’s extensive blazes, no one can say.

It is known that rainforest trees are especially vulnerable to fire. Because fire is a relatively new, and foreign element in the Amazon, the forest and the life within it have not evolved to withstand the flames. Tropical trees, for instance, lack the thick bark of a temperate fire adapted species such as sequoias or pines. A rainforest fire, burning the forest for the first time, kills most small trees and seedlings and can kill 50% of large trees. Seeds in the soil heated to high temperatures can lose their ability to germinate.

While bigger trees may not be immediately killed, fire damage to a trunk can cause a mortal wound, allowing pathogens to enter the trunk. These trees then take years to die. But as they succumb, they open the canopy, making surviving trees more susceptible to being knocked over in wind storms. When those large trees fall, the dark rainforest understory is compromised, with devastating consequences for the biota which has evolved in deep shade.

Barlow and his colleagues found that after Amazon forest fires, flora changes radically. Understory specialist birds, which feed in the leaf litter, “basically disappeared” with populations still not recovering ten years later. This finding is not surprising, he says, because a decade after fire, tropical forests look very different, with less biomass and an open canopy.

One study indicated that the abundance and types of dung beetle species were altered in burned Amazon forests. Dung beetles play a vital role in nutrient cycling and seed dispersal and a decline in their diversity has cascading effects on the ecosystem.

In a large experimental study, forest plots that were burned several times saw a decline in the abundance of specialist forest ant species. These species disperse seeds, play specific roles in the forest food chain, and work the soil via their burrowing. After fires, these specialist ant species were replaced by an influx of ant communities from more open-habitat areas such as savannas. The loss of these specialized forest species means the loss of the specialized work they do.

In the same experimental burn area, a different study found similar patterns of species loss for butterflies, with forest specialists decreasing in burnt areas. There is a growing body of evidence demonstrating that fire is a threat with long-term consequences to animals and plants that require the cool, moist, understory microclimate of the Amazon forest.

How do forests recover?

Because forest fires are a newer phenomenon in the Amazon, scientists are still not sure how long it takes forests there to fully recover, or even if they do. It is not surprising for researchers to examine a forest in the years after a fire and find a loss in biodiversity, but the fate of the animals on land and in the water, as well as the role of that biodiversity in supporting forest recovery, remain a mystery.

As researchers examine these landscapes, surprises emerge. For example, lowland tapirs (Tapirus terrestris), a large fruit-eating mammal that looks somewhat like a pig crossed with an elephant, may assist with the natural recovery of burned forests, Paolucci’s team found in a recent study. Tapirs travel and defecate more frequently in degraded forests, dispersing up to three times as many seeds in degraded forests.

However, these tapir experiments involve small experimental fires and occur close to unburned forests. “What happens in a fragmented landscape when a burnt area is not adjacent to an unburned patch?” Barlow asks. “Where are the seed sources going to come from then? And how does the forest recover when you don’t have forest connectivity or the ability for the large game and the birds to help disperse the seeds?”

In areas that have burned multiple times, or in areas with large amounts of deforestation and little connectivity, with little chance to recover, the forest changes from a closed canopy primary forest to, what Barlow describes as, “essentially open scrubby bamboo and vine dominated vegetation, which is very, very flammable.” This landscape, now devoid of game, food and medicines, is “of very low value to local people as well as most forest species.”

“The Amazon is like a bubble… if the trees are intact, it keeps moisture under the canopy in the forest,” Ernesto Alvarado, a professor of wildland fire sciences at the University of Washington said. Logging, roads, deforestation, and fires can pop this moisture bubble. “You open the canopy, right? It’s like a bunch of holes in the bubble, and now the moisture is better escaping and the forest becomes drier.”

Also, the Amazon dry season is getting longer and mega-droughts more common, primarily due to climate change and deforestation. Towards the end of the dry season, plants in more seasonal parts of Amazonia must rely not on rain but on water held in the soil to keep on transpiring and releasing moisture into the atmosphere. But when the dry season extends beyond that seen in past years, plants lack soil water, and some shut down their demand for moisture by dropping leaves. This dry leaf litter is ripe for burning when a fire set in a neighboring field blazes out of control.

“All these years when fires took over, plants were water-stressed,” Paulo Brando, a tropical ecologist at the University of California, Irvine, said, “and then, for animals… all sorts of problems, right? Because the resource availability in terms of fruits and energy decrease a lot if you have a combination of droughts and fire.”

The future of the Amazon rainforest will depend on complex interactions between fire, deforestation, and deepening drought due to climate change, as well as other human causes.

Some scientists warn that the Amazon is nearing a tipping point, when precipitation diminishes until the rainforest transitions into a “derived-savannah.” However, unlike a natural savannah, which is a highly diverse and functioning system, a severely degraded Amazon may look more like, “a very impoverished [ecological] system, less diverse, providing less function,” Brando said.

The Brazilian Amazon’s southern portion is currently most vulnerable to this forest-to-savannah transformation, especially along the Arc of Deforestation where rainforest meets pasture and cropland, and where several elements, including worsening drought, a prolonged dry season, and someone ready to set the land ablaze, all come together.

One ray of hope: Because Amazon forest fires burn slowly, they are fairly easy to fight with the right resources in place, Barlow says. Brazil has the technology to both predict and monitor fires with accuracy. However, without the political will and investment to do so, the Amazon rainforest, which holds 10% of the planet’s biodiversity, will continue to burn.

Banner image of royal flycatcher (Onychorhynchus coronatus) in the Amazon by Philip Stouffer.