Two supporters of US presidential candidate Donald Trump have been arrested while campaigning for the Republican Party leader outside the US embassy in Kampala.

Ugandan news sites reported on Tuesday that the group, from the Uganda Young Democrats, had tried to storm the embassy in the Nsambya suburb of Kampala where they sought to declare their support for Trump in the forthcoming elections.

The young Ugandans’ support for Trump appeared to be linked to his comments about ridding Africa of long-serving dictators, including Ugandan President Yoweri Museveni, who critics believe rigged February’s presidential elections.

“Trump, in his manifesto said he would deal with long-serving African presidents, including Museveni. We had to show our solidarity with him,” Hakim Kizza, one of the members of the group who had stormed the embassy, was reported as saying.

However, on arrival, the group was told by police that they would not be allowed inside the embassy because they had not obtained permission.

A number of the activists then dispersed but two who remained were subsequently arrested and taken to Kabalagala police station.

Kampala Metropolitan Area police spokesperson Emilian Kayima was not available for a comment but had earlier warned they could not allow this “drama” to proceed.

“They ought to have informed the embassy that would in turn write to us but this was not the case,” Kayima said earlier before the incident.

Last month, members of the group were arrested at Kampala’s parliament entrance after they protested against the Presidential Age Limit Bill.

They were then detained at Kampala Central Police Station before being charged at Buganda Road court.

Things turned ugly, however, when they abused the trial magistrate and beat up the state prosecutor for refusing to grant them bail. 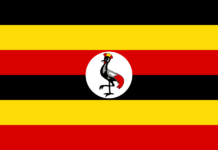