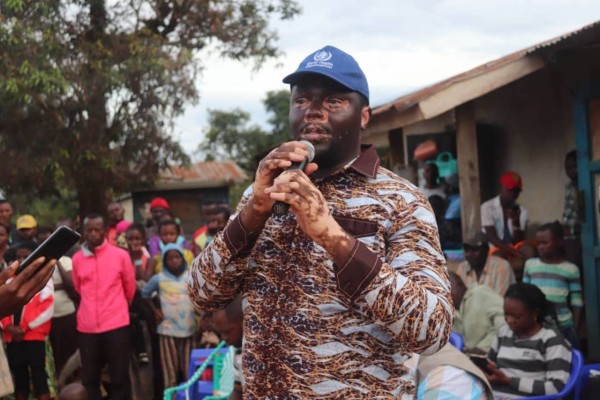 “In some places they threw stones at us, but in others community leaders became engaged and fought alongside us for the survival of their people,” says Dr Freddy Banza, an epidemiologist and public health specialist with World Health Organization (WHO).

Gaining community trust and acceptance has proven a critical armour in combatting the world’s second worst Ebola epidemic in the Democratic Republic of the Congo (DRC). Dr Banza who coordinated Ebola response operations in Mambasa, a small town in the northeast of the DRC  is keenly aware that without community collaboration, efforts to halt the virus would come short.

In October 2019, after burying their kin suspected to have died of Ebola, a family fled into the forest outside their village near Mambasa, recalls Dr Banza. Without seeking the help of the Ebola response team responsible for safe and dignified burials, handling bodies without the appropriate protection is an extremely dangerous undertaking.

However, risks of further infections were eased with the involvement of the village chief. Having been educated about Ebola risks and working closely with Ebola response teams, the chief set off to retrieve the hiding family and brought them back for vaccination.

Ebola response teams have in several instances encountered communities and families unwilling, and at times hostile, to collaborate in the efforts to curb the virus. Increasingly involving communities and their leaders in the response has helped improve the reach and impact of the virus control.

Dr Ibrahima Socè-Fall, WHO Assistant Director-General for Emergencies, is clear: “The end of the Ebola epidemic will require that communities take ownership of the response.” For his part, Dr Banza adds, “When I see communities get involved, it gives me the strength and motivation to keep working to save lives.”

Working to save lives has been Dr Banza’s passion from a young age. Growing up in the Republic of Congo, he was deeply affected by the maternal deaths he saw in his community and the critical lack of health care. This led him to pursue medical studies. He first became an attending physician, then a managing physician and finally an area chief in his native country before bringing his expertise as an epidemiologist and public health specialist to other countries, including Chad, Guinea, Haiti, Madagascar, Senegal and Zimbabwe.

He joined WHO in 2012 and in 2014 was part of the response team for the West Africa Ebola outbreak, the world’s largest and most severe. When the current outbreak in DRC was declared in August 2018, Dr Banza quickly joined the team. “My greatest achievement will be to help bring this Ebola epidemic to an end. And to be able to remind myself that despite resistance, despite the difficulties encountered, we were able to accomplish this, and that I contributed to the effort.”

Coronavirus – Democratic Republic of the Congo: The Head of State Convened a Meeting of the Expanded Security Services Response Committee (Saturday 28 March)

“Migration is Key to the Development of the Region,” The International Organization for Migration (IOM) Director General Emphasizes During First Visit to the Sahel...